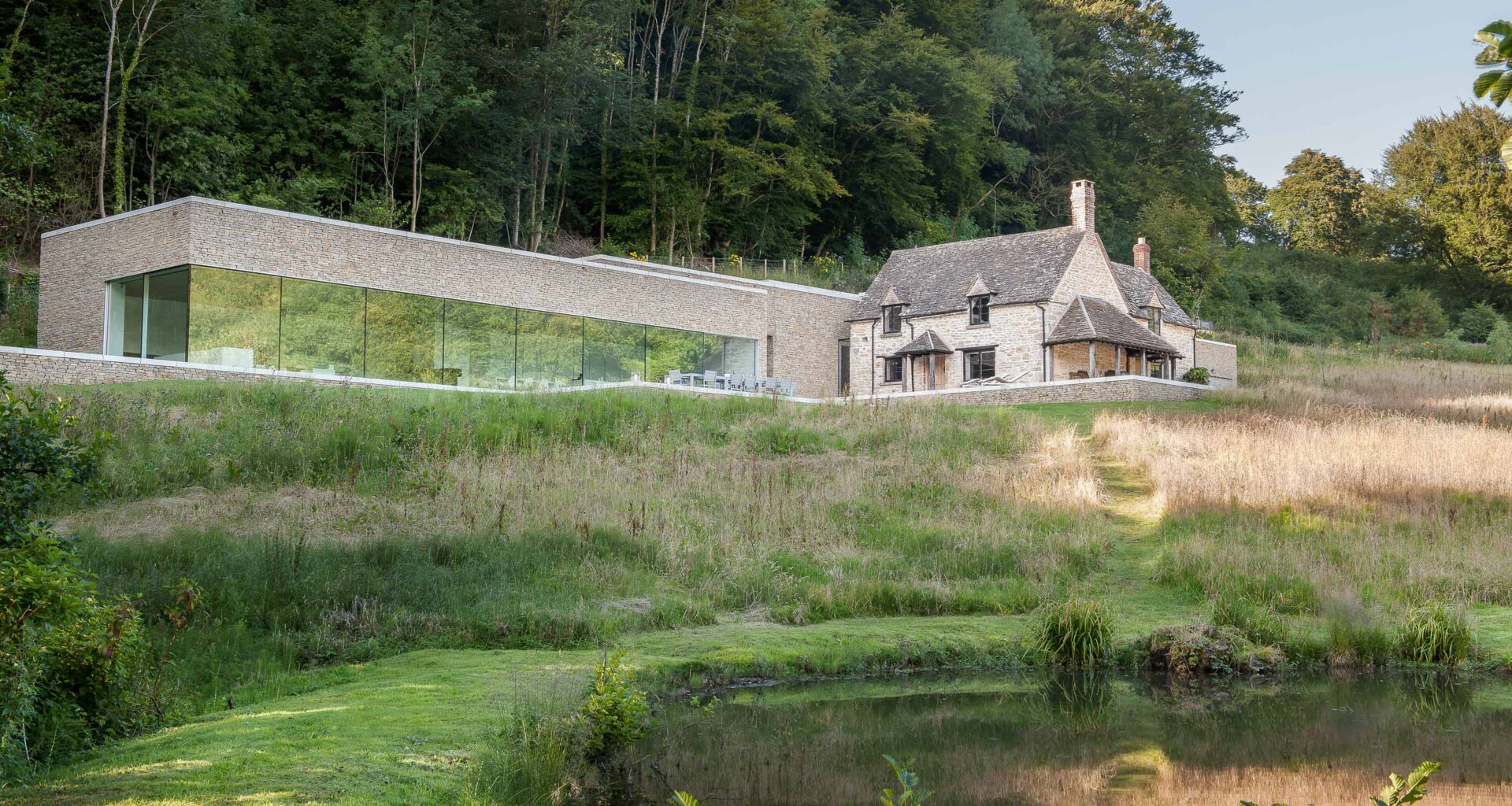 Sheathed in stone and rich in character, this period set-piece is at the heart of a sensitive intervention based on Modernist doctrine by architect Richard Found of the London-based practice Found Associates.
Total
1
Shares
1
0
0

Built Around an 18th Century Edifice in the Cotswolds, Architect Richard Found’s Contextual Country Home Is the Work of a Committed Minimalist

Designated an Area of Outstanding Natural Beauty in the UK, the Cotswolds is a painterly landscape of ancient woodlands, limestone valleys, and graceful undulations of green. Here, in a secret valley, is a holdover of an earlier time: a derelict 18th-century gamekeeper’s cottage. The building speaks to the vernacular stone construction of the Cotswolds that, along with the age-old terrain, inspired new architecture that forms a contemporary family home for the London-based Richard Found himself.

While irrefutably picturesque, the site—a 16.5-acre plot that Richard Found discovered while perusing the local paper—was not without its complications, including the ramshackle state of its existing cottage and other neglected outbuildings. Still, it was a lovely piece of land and he was taken with its attributes: seclusion, closeness to nature and proximity to water. He took Ralph Waldo Emerson’s words—“Build therefore your own world”—as his own and embarked on remaking the place.

Richard Found’s original vision to build a brand-new modern structure in place of the existing cottage meant demolishing the latter. Upon learning that the property was spot-listed by Historic England, however, he was forced to navigate a gauntlet of limitations put forth by the local planning commission; most critical of these strictures was keeping the existing cottage the core of the plot. Richard Found scraped the initial plan and conceived of a radical new work, one he carved into the landscape. This rectangular extension is a robust representation of his architectural principles and gifts.

“The extension was meant to be subservient to the original cottage,” explains Richard Richard Found, noting that on the ground one only ever sees half the extension with the existing building.

The challenge, he points out, was to design an expansion while being respectful of the original structure, which, thanks to two grass rooves that help merge the extension with the landscape behind, and a glass link between the cottage and extension that separates period from contemporary, is still the most dominant feature on the site. It is a best-of-both-worlds design—a harmonious mix of classic and modern achieved by contrasting old and new building techniques and materials.

Refurbishing the existing cottage was the first phase of the project. Floors were replaced with underfloor-heated pavers, systems (including the installation of water-based underfloor heating) were modernized, and the structure was thermally upgraded. A new kitchen and bathroom, meanwhile, were conceptualized as furniture to avoid having to change the shape of original rooms.

The new, RIBA Award-winning extension was, according to the practice, “conceived as a series of dry stone field walls that descend down the slope of the land behind the cottage, articulating the new building into three sections—the entrance and link to the cottage at the same floor level, a lower section to the west housing the main living areas, and a raised wing to the east set further back into the slope that provides the more private spaces of the bedroom accommodation.”

The fourth elevation is the roof, as the building only emerges from the ground on three sides. Situated on the path of the sun, each habitable space frames views of the landscape. Bedrooms embrace morning sunlight and the living space indulges the setting sun. These choices—maximizing daylight where possible and framing views of nature—are broader expressions of the practice’s ethos.

The glass link serves as a kind of aperture to the natural surround, amplifying both light and landscape that, in turn, immerses the house in beauty and calm. It also draws attention to the sober and orderly interior, which, void of modern distractions and conceits, highlights a few key pieces and judicious use of space.

That this private Cotswolds residence is seamless, and the work involved in its creation all but imperceptible, makes it remarkable. It also makes it the work of Richard Found who in hindsight appreciates the dynamics that forced him to keep the now Grade II listed cottage and create a much more interesting project. Where one does not see the effort, however, one senses the thinking behind it quite acutely. Such is the beauty of the architect’s built environment. foundassociates.com

Explore Story
Residential construction looks to the future of sustainable living in L.A. Written by Wendy Bowman | Photography courtesy of…
0
0
0
Explore Story
SETTING THE TONE From Los Angeles to New York, bicoastal Birgit Klein brings her Euro-chic sensibility to every…
0
0
0
Explore Story
In Spanish there is a saying, cosas cambios, which means, things change. In few places is this more evident than in the South Bay, where the real estate map is perpetually shifting—quickly, in some cases dramatically, and block by block.
0
0
0
Explore Story
A popular event at Modernism Week reinvents itself with a 21st-century addition to its midcentury world Written by…
0
0
0