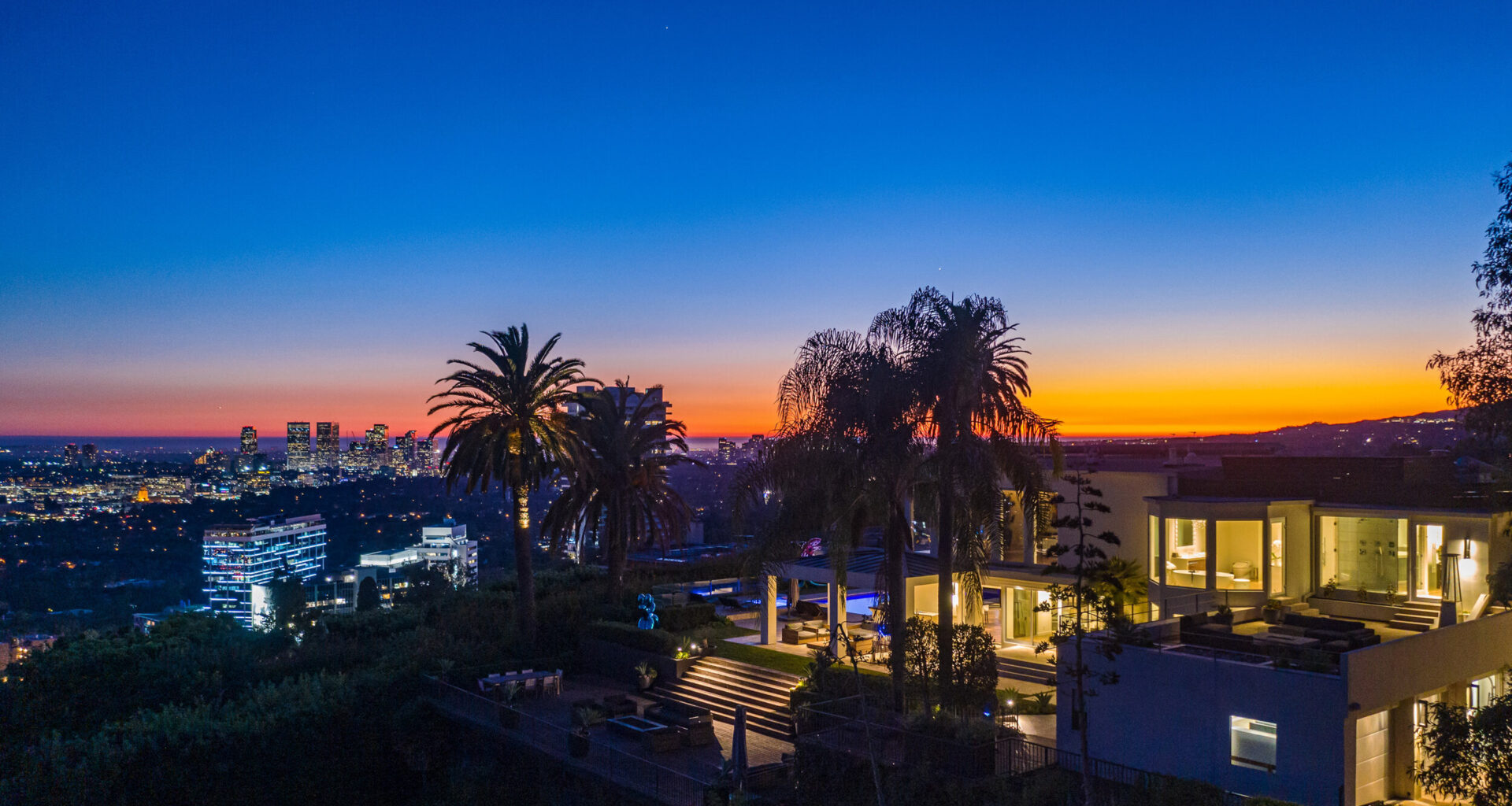 An Enviable Oasis, a Contemporary Home in the Select Bird Streets Enclave Epitomizes the California-cool Lifestyle

This modern Bel-Air manse, set on 1.5 acres high atop the Sunset Strip, has served as a celebrity hideaway for good reason. The private lair previously rented by U2 front-man Bono, rapper Future and Middle Eastern royalty, to name a few, is “one of the most private homes in the Bird Streets,” according to Hilton & Hyland’s Drew Fenton, who is representing the sale of the six-bedroom, 12-bath estate at 1380 Mockingbird Place with James Harris of The Agency.

Note, for instance, the gated entrance almost camouflaged by its tropical surroundings that opens to reveal a driveway that travels for 700 feet before emptying out at an exclusive resort-like oasis with a backdrop of unobstructed jet-liner views from Downtown L.A. to the Pacific.

Now on the market for $48 million, the mansion, which is owned by the Bird Streets Trust LLC, also offers 14,000 square feet of refreshed interiors filled to the brim both inside and out with upscale touches and amenities like white oak flooring, striking sculptures and floor-to-ceiling walls of glass throughout, as well as its own exterior fitness facility. Adding to the home’s California-cool factor: a gourmet commercial-style kitchen; screening and game rooms; and six bedrooms (including a spacious guest suite and 2,500-square-foot master retreat outfitted with dual terraces and a fire-pit).

Then there are the expansive outdoor grounds, which hold court as an entertainer’s dream with a motor court providing space for 20-plus cars, sparkling pool and spa, built-in barbecue, and viewing deck for dining, lounging and relaxing.

And lest one doesn’t like the current digs just the way they are, the estate comes with an approved dirt haul-out permit to create a subterranean floor and plans for a new 31,000-square-foot contemporary compound designed by the South Africa-based architecture firm SAOTA.

Explore Story
This modern Beverly Hills home takes living au naturel to the next level Written by Wendy Bowman |…
0
0
0
Explore Story
Extensively remodeled in 2016, this 4,280-square-foot residence in Venice Beach not only is overflowing with ultra-luxe design elements but also offers easy access to the beach, as well as popular Abbot Kinney restaurants and boutiques such as Intelligentsia, Felix and The Butcher’s Daughter.
0
0
0
Explore Story
Table of Contents “I was selling real estate at the time in Pacific Palisades, California, so imagine that:…
0
0
0
Explore Story
Expect architecture that nods toward Spanish Colonial style, replete with a large central courtyard adorned with a fountain and outdoor fireplace that opens to enticing indoor environs rife with clay-veneer plaster walls, wide-plank French oak flooring and stylish Nanz hardware throughout.
0
0
0