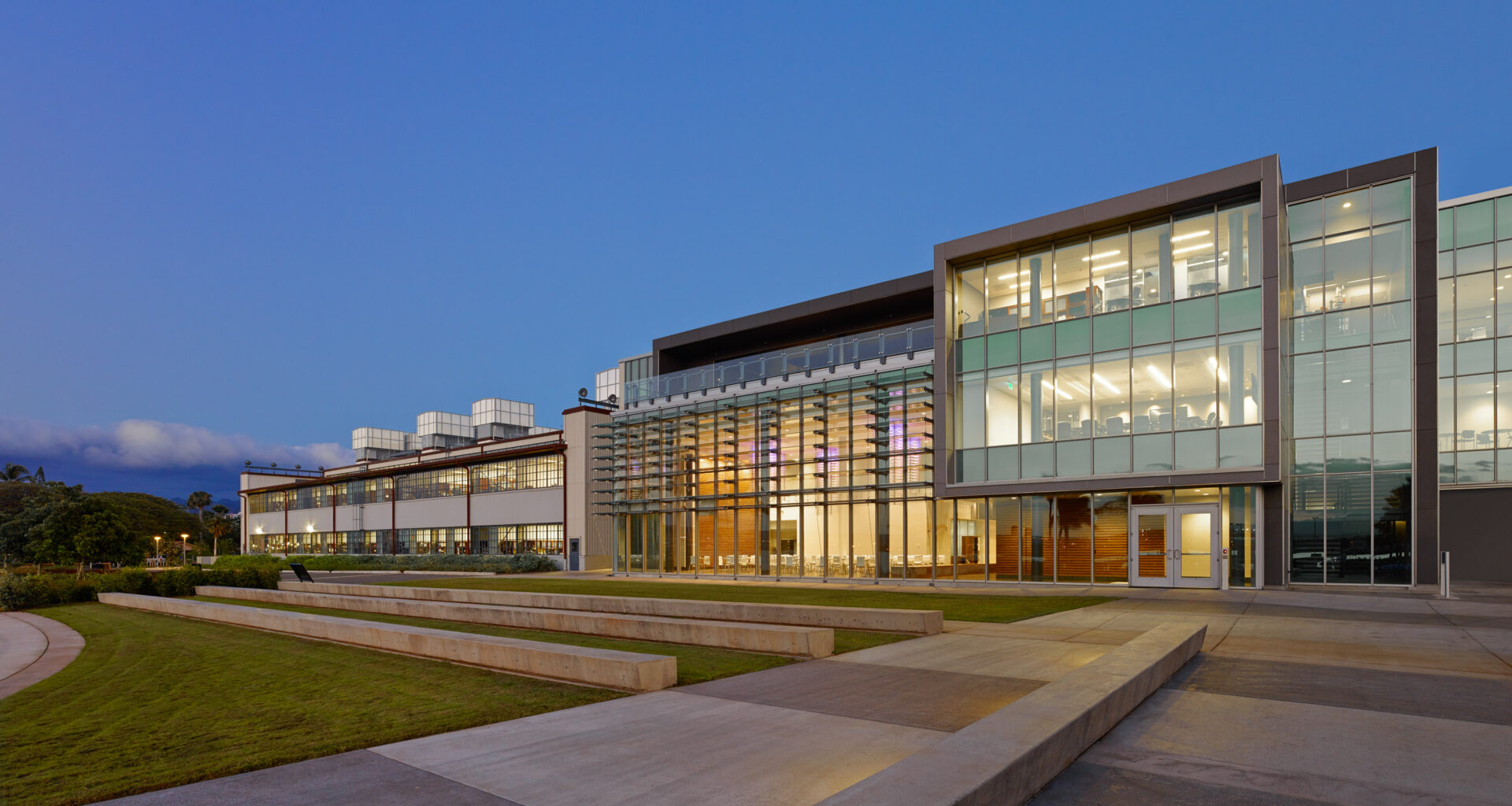 Headed by HOK, a Monumental Adaptive Reuse Project Ushers in a New Era for NOAA at Pearl Harbor

The events of Dec. 7, 1941 forever changed Oahu’s Ford Island at Pearl Harbor, where the Japanese staged its ferocious attack on the nation’s Pacific Fleet. While a number of vessels sustained damaged or were destroyed, a pair of aircraft hangars designed in 1939 by leading industrial architect Albert Kahn—the mastermind of Ford Motor Company’s plant in Highland Park among other Metro Detroit buildings—narrowly escaped annihilation. Today these historic structures are the protagonists of a massive adaptive reuse project.

Named after Hawaii’s late U.S. senator, a decorated WWII veteran, the project—a 350,000-square-foot building set on a 1,263,000-square-foot site—is as epic as the statesman’s reputation and called for the conversion of the original hangars, with a new steel-and-glass building to link them.

As the heart of the work, the hangars are, as HOK describes, “inspired, beautifully simple solutions for how the new Center uses air, water and light.”

Key to the design, the firm continues, is the use of “clear, simple forms and materials carefully selected to complement the scale and framework of the existing hangar buildings while providing a state-of-the-art Pacific Region headquarters for NOAA,” where extensive programs are conducted and federal departments, such as the crucial Pacific Tsunami Warning Center, are housed. Equally vast as the facility and its functions is its population—upon completion, the project consolidated 800 people from 15 different NOAA offices across Oahu into one building.

Given the nature of NOAA and its work—chiefly environmental prediction and marine stewardship—the LEED Gold Inouye Regional Center is a model of sustainable design that has garnered an array of nods for excellence, including an AIA COTE Top 10 Green Projects award.

Among its environmental bona fides is a skylight diffuser system that renders artificial light unnecessary during the day; the first hydronic passive cooling unit that utilizes water pulled from below the sea bed and natural ventilation to condition the space; and a system to capture graywater used to irrigate the native landscaping. The building also was designed to resist an unprecedented storm event. Should natural disaster strike, flexible space was conceived to provide critical response efforts.

More broadly, and perhaps most importantly, is that which underscores the facility: Hawaii’s relationship with the ecosphere, facilitated by its central position in the Pacific, and enforced by NOAA’s larger mission to provide “science, service and stewardship” with regional culture and conservation. In this, one must observe the project as a physical symbol of mutual commitment.

As its namesake, Daniel K. Inouye said: “There is an inherent connection between Hawaii’s people and the sea, reverence for her power, reliance as a food source and a respect for the sea and the environment through the generations.”

It is a foundation that a building bearing the name of one of Hawaii’s most beloved figures certainly deserves.