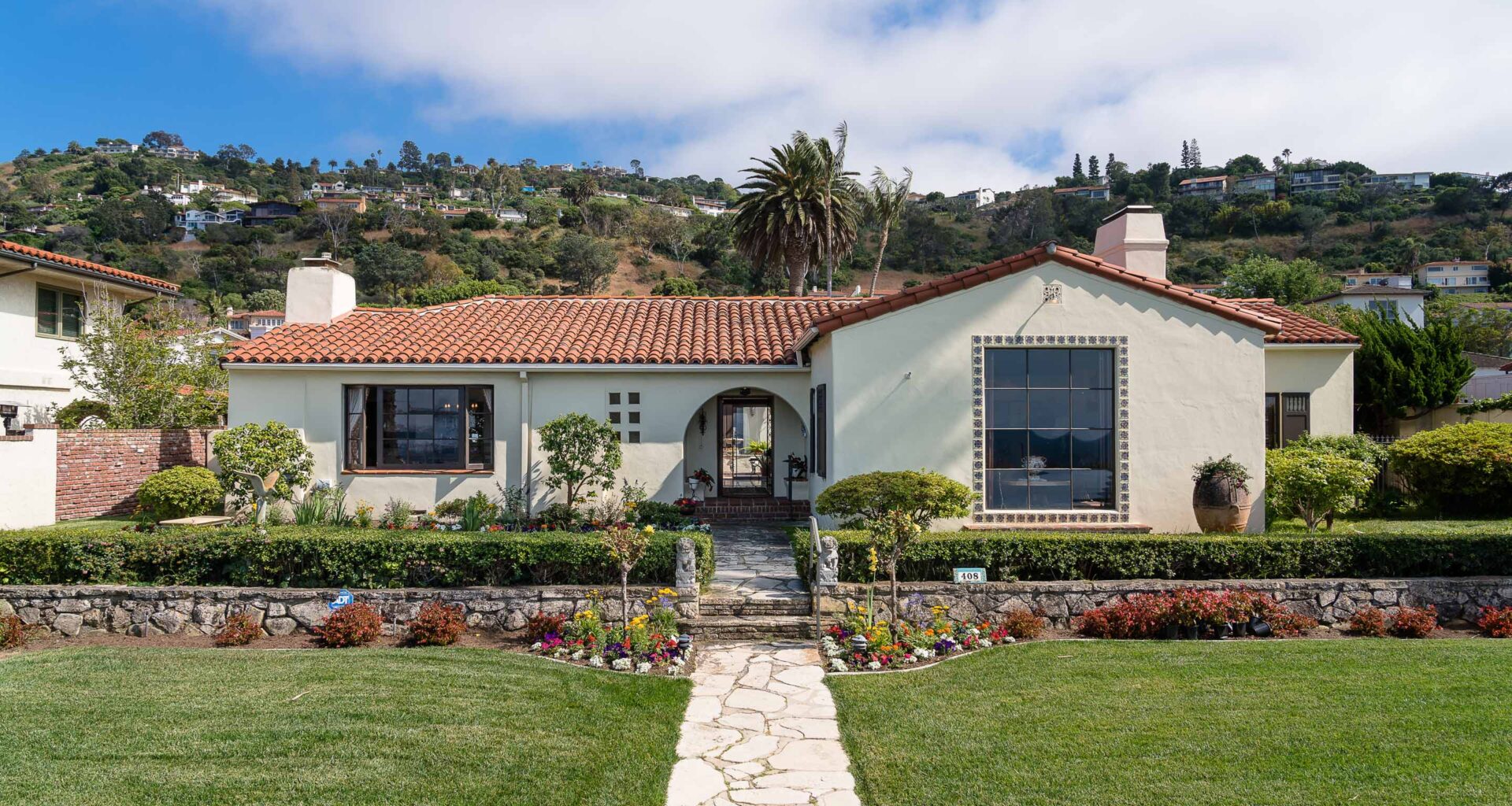 Among the first homes built in fledgling Palos Verdes Estates was a Spanish Revival villa architected by Winchton Risley, a model residence completed in 1926 with a red clay tile roof, white stucco exterior and a spacious courtyard flanked by two wings.
Total
0
Shares
0
0
0

In 1926, the country was in the midst of its boom years. Calvin Coolidge was president and Prohibition was still in swing. In Southern California, a swath of one of its most exquisite and untamed coastlines was slowly being fashioned into a residential subdivision by the Olmsted Brothers, who were famed for a prolific list of projects ranging from parks and neighborhoods to state capitols, libraries and universities.

“Palos Verdes was originally envisioned by the developers as a Mediterranean-type enclave in Southern California,” says Todd Stanton, whose family, longtime Palos Verdes residents, purchased the home in the early 1980s.

The model remains today, and in gleaming condition, a rare and unvarnished slice of an earlier time. Its neatly manicured front lawn, expansive and tailored with natural stone walls and boxwood hedges, make for an apt introduction, as does the graceful arched entranceway.

“The view is unblockable. Nothing can ever go on that bluff.”

Inside the home, original details abound, from handmade and painted tiles to orange-hued terracotta to hand-carved mahogany doors and moldings. There are also oak floors and earthy redwood ceiling beams, some with engraving. A few smart updates, notably a sunny farm kitchen, have been made in keeping with the home’s original vision.

“There’s such an understated elegance about the home,” notes Stanton. (Given its pedigree and early 20th hand-craftsmanship, the home should remain as is.

“The seller wants to sell the home to someone who understands its historic value, and wants to keep the integrity of the place,” explains Teri Hawkins.)

Once awarded the Art Jury’s Certificate of Honor for the most notable residential architecture of 1926, the original developers were keen to place this six-bedroom, a five-bathroom model where they did—it sits on one of the most prized lots on the peninsula, and on Paseo del Mar no less—and enjoys front-row views of the water. (Views that are sweetened by the fact that they’ll always remain this way.)

“It sits across the bluff from Haggerty’s and RAT Beach,” says Teri Hawkins of the home.

From oversized windows in the formal dining room, and large living room, one looks out at a California scene—pale turquoise skies and an endless, royal blue ocean. It inspires now as much as it must have nearly a century ago, when the home was built as a model place from which to enjoy this Mediterranean-like paradise.

These days the view includes the Queen’s Necklace, named for the sparkling nightly visage of lit-up coastal land.

Recalls Stanton: “My mother used to say, ‘Your father doesn’t need to give me diamonds because I have my own strand right here.’”

Explore Story
Two legendary L.A. landmarks help cement the city’s standing as a major player in the estate game—fascinating past…
0
0
0

Explore Story
Nestled on a Secluded Hilltop in One of L.a.’s Blossoming Communities, This Newly Constructed Compound is Exquisite in…
0
0
1