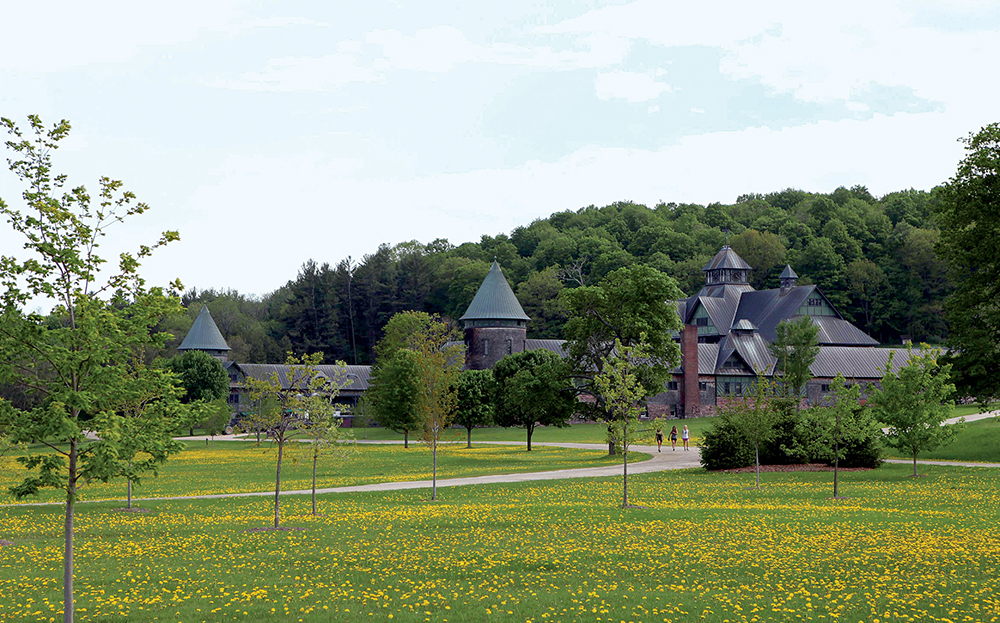 A testament to pastoral beauty and American progress, Shelburne Farms is a grand 19th century estate built with a modern vision

To stroll the rambling grounds of Shelburne Farms, a National Historic Landmark on the shores of Lake Champlain in Vermont, is to sense an America of another age, when the move from agrarian to industrialized nation produced unprecedented wealth for those powering its most profitable engines. During the time that Shelburne Farms was built—over the course of two decades starting in 1886—American cities were thick with industry and suffocating summer heat. Looking to live like European aristocrats, the moneyed class built extravagant mansions, deceptively coined “country cottages,” in highly visible enclaves like Newport, Rhode Island, where one could spend the summer amid clean air in the most elaborate fashion imaginable.

Likewise, a magnificent Gilded Age domain, Shelburne Farms, was still astonishingly singular for its era, located not in a center of social ambition, but in rural Vermont. And its owners—Eliza “Lila” Osgood Vanderbilt and her husband Dr. William Seward Webb— pictured not an ostentatious showpiece for themselves, but a consummate agricultural farm. The Webbs hired prominent New York City architect Robert H. Robertson to design their bucolic 3800-acre parcel, and he brought on landscape designer Frederick Law Olmsted to help plan the grounds.

“It’s a very unusual place in that it’s so pristine and protected,” says Glenn Suokko, author of the new book Shelburne Farms: House, Gardens, Farm, and Barns. “The pace is slow, the landscape is very gentle and extremely well-planned. There’s a carefully considered way in which one works their way through the property.

It’s very organic, the way you come upon amazing views of the incredible buildings. It’s architecture as well as fields, meadows and woodlands, then the dramatic views of Lake Champlain. So the setting is quite compelling. There are no real signs of contemporary life, other than a car here and there. No billboards, very few signs. You can go through the woods on beautiful paths to experience nature as it should be. There are animals, gardens. It’s just got everything condensed right there, in the nicest, most thoughtful way.”

The Dairy Farm, meanwhile, is home to a treasured herd of grass-fed Brown Swiss cows, and there’s a traditional Maple Sugaring operation for making pure maple syrup. Shelburne Farms was never profitable, nor was that ever the intention. Progress was the point. In an early form of new environmentalism, the estate looked to advance crop production and breeding livestock. By the mid-20th century, and facing difficult economic realities, members of the Webb family recast Shelburne Farms as a nonprofit education center promoting sustainability and matters of responsible pastoralism. Today, the once private family estate is public and 1,400 acres, but still way ahead of its time.

Explore Story
A showpiece on stilts in Sherman Oaks, 3707 Oakfield Drive is a house of considerable architectural stock, a Platform House originally designed by Austrian-American modernist Richard Neutra, who was especially prolific in Los Angeles.
0
0
0

Explore Story
Built in 2018 on a 25,682-square-foot plot surrounded by oak and fruit trees—which were preserved as much as possible—the property comprises two main structures: the main house and the guest house; with an incorporated bike barn.
0
0
0
Explore Story
A masterpiece made for au courant living in Manhattan Beach Live the luxe life while steeped in elegance…
0
0
0

Explore Story
Soon to debut, Lake|Flato Houses: Respecting the Land (Rizzoli) is the latest foray for the firm, which was named AIA’s Firm of the Year in 2004, and whose remarkable, environmentally sensitive, and astute structures explore an intimate relationship to site and surround.
0
0
0