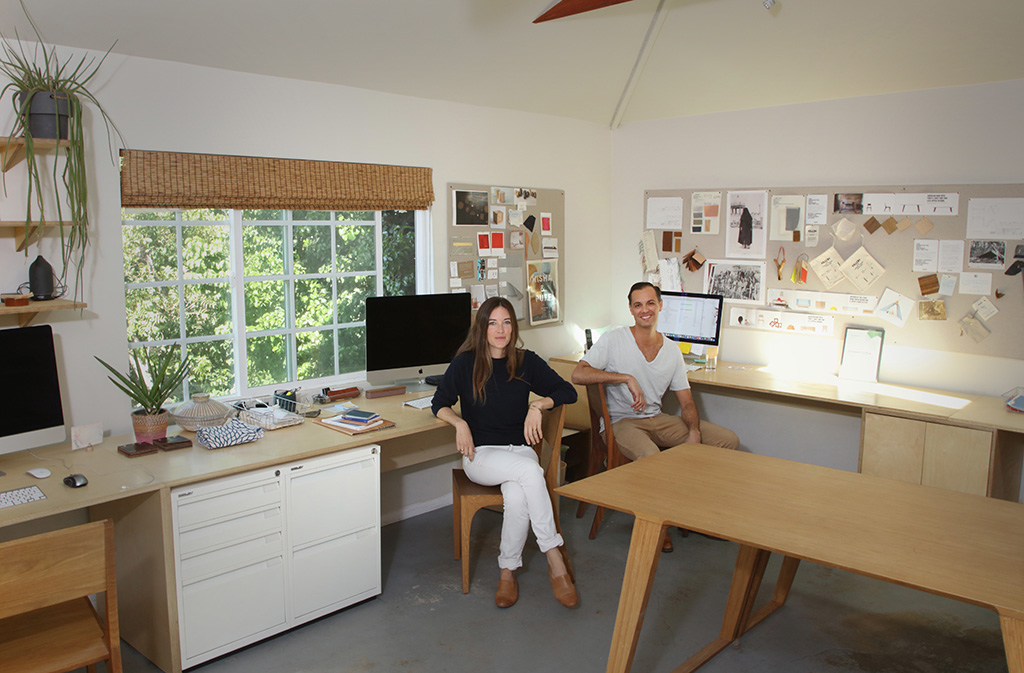 In 2007, mere months before the nation’s economic collapse, husband-and-wife design team Johann Pauwen and Michaele Simmering launched Kalon Studios in Los Angeles—a manifestly risky move, given the climate of the times, but one of solid resolve indicating a gut-level trust in collaboration and vision. In the years since, the company has merged its makers’ passion for contemporary design, simplicity and uncompromising sustainability into honest, functional furnishings.

If Kalon Studios has a backbone, it’s need—a pared-down practicality that sent Johann and Michaele in search of a crib for their first child. Unable to find one that met their aesthetic needs and environmental ethics, they conceptualized their own—the lo Crib, the first of many Kalon kids’ furnishings. The design world took notice, and within a year of its founding, Time magazine crowned Kalon as one of the world’s most influential green companies—now with several collections and an array of furnishings, from chairs and tables to dressers and beds.

“Johann and I are kind of dream chasers,” says Michaele, of the couple’s associative confidence that has buoyed Kalon from the beginning. “We really believed in what we were doing.” Uniquely, as partners in business and in life, as well as parents to two young daughters (namesakes of Kalon’s first two cribs), Johann and Michaele are unhampered by creative discord. “There’s very little disagreement when it comes to design or the design process,” says Johann, adding that the rare difference of opinion is opportunity to methodically refine a design to its very essence. Solution, he explains, is in the space of exchange. Important to clarify, however, is that change does not mean compromise—something neither designer is willing to do as it pertains to vision and sustainability.

This artistic synergy carries over to their work—durable design that gently dialogues with its environment. “We design what is essential to us,” Michaele explains. “There’s not a lot of frivolous furniture that we make. There’s an understanding that furniture should last for a really long time. People get tired of things, so something that blends into the environment and embraces the larger context—that speaks to each of us deeply.” With sustainability as a cornerstone of all Kalon creates, pieces are  handcrafted in the U.S. by a small group of traditional craftspeople using locally harvested wood from sustainably managed forests. As a material, wood is synonymous with endurance and develops a distinguishable richness over time. “Wood ages in a way that doesn’t degrade the aesthetic or functional quality of the material,” Johann explains. “It’s a natural, abundant and traditional material. Humans have used wood for everything—for tools, for shelter. It lends itself to so many things. You can shape it, glue it, burn it, bend it,” and, Michaele adds, “repair it, which adds this whole other quality that other materials don’t have.” Beyond all this is varied grain structure and color—wood is not uniform. Rather than aggressively assert itself in a space, it occupies it with heirloom ease.

Johann and Michaele’s source references include a foundation of interests (traditional Japanese craft, Shaker design, their everyday lives), but they are equally fascinated by a new process, material or concept. Utility, they explain, does not make an object less beautiful; it’s the rational parts of a design that influence what it ultimately becomes. This sense of facility is “inextricably linked to Southern California,” says Michaele. “It is such a casual culture here, and there’s an effortless aspect to our aesthetic that fits the light, breezy California lifestyle.”

Forthcoming for Kalon Studios is a dining table and complementary pieces, along with an expanded 100-percent natural and organic mattress line. Its founding design team, meanwhile, also has co-founded Rift, a next generation American manufacturing facility where “we will not only be building furniture for ourselves,” Michaele says, “but also for select designers and furniture brands.” Kalon Studios has in all ways, it seems, proven to be a mirror image of its designs—built to last.

Explore Story
Dwell on Design, America’s largest design convention, comes to Los Angeles Written by Joclene Davey Dwell on Design, the…
0
0
0
Explore Story
From tours of L.A.’s top sustainable projects to captivating speakers such as cultural innovator Bjarke Ingels to an exhibition…
0
0
0
Explore Story
In preparation for its 50th anniversary in 2021, Rothko Chapel will undergo substantial renovations to restore the Rothko Chapel building and its grounds starting in March and continuing through December of this year.
0
0
0
Explore Story
Dawnridge, a house with a slow, transcendent dimension to counterbalance the bustle of Silicon Valley, and utterly suspicious of ornament, is rewilded to the environment by Field Architecture.
0
0
0