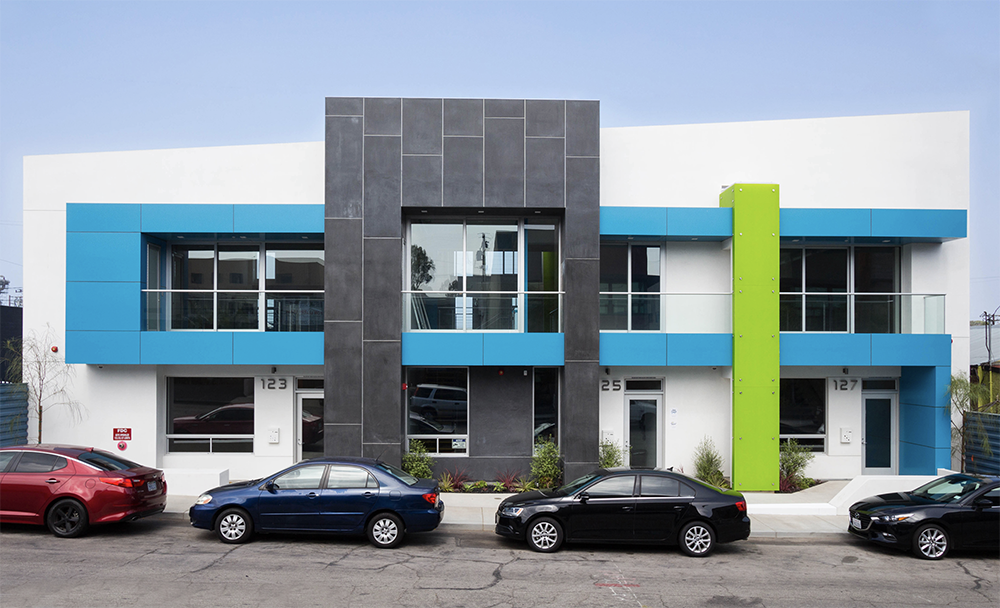 El Segundo Gets Another Boost with the Idea Factory

The business-friendly city of El Segundo has added to its ever-growing cache of commercial offerings with a modern creative office campus. Opened in July, the new $6.3 million Idea Factory development offers tenants 10,500 square feet of indoor office space, along with 1,000 square feet of outdoor meeting and recreation areas.

“This is the optimal location for innovative entrepreneurs and small businesses to headquarter their endeavors,” says Brett Drogmund of Propeller Properties, who developed the project with CalStar Builders and JGC Construction.

“The visionary companies of El Segundo have revolutionized the way we work and live. The Idea Factory continues that tradition, with open flowing floor plans, high ceilings, tons of natural light and one of the largest community decks built in the area.”

“THIS IS THE OPTIMAL LOCATION FOR INNOVATIVE ENTREPRENEURS AND SMALL BUSINESSES TO HEADQUARTER THEIR ENDEAVORS.

“Having sold and leased properties in the Smoky Hollow district for the last 25 years, I believe the Idea Factory is a perfect fit for the newly modified use of the area, which prior to the modification was predominantly occupied by machine and auto repair shops,” says Bill Ruane, who is co-representing sales of the building with Matt Crabbs, both of RE/MAX Estate Properties.

Adds Crabbs, “I feel that the idea factory really embodies the spirt of how we conduct business moving generations ahead. Work/business is not something we have to do, but get to do; it’s a perpetual experience that complements our lifestyles.”

“My vision for this three-year project was to design the ultimate opportunity for companies to collaborate and put a dent in the universe creatively.”

“I believe everything starts with story and then execution,” says Drogmund, who has a creative background with Walt Disney Feature Animation and helped develop films such as Fantasia 2000, Lilo & Stitch and Tarzan.

Coming up, look for the developer to create a new concept across Sepulveda in the Utah track area.

Explore Story
When developers first laid eyes on the parcel of land where they hoped to build a new luxury, mixed-use rental community, the downtown Santa Monica site was dotted with outdated fast-food joints and an antique mall. Parking also was difficult, as cars entering and leaving disrupted traffic flow.
0
0
0
Explore Story
Brand-new construction with classic Mid-century Modern design elements and cutting-edge craftsmanship creates a one-of-a-kind living experience It’s no…
0
0
0
Explore Story
When Baron Steinbrecher attained his real estate license in 2012, his first order of business was to find…
0
0
0
Explore Story
Billy Duffy, lead guitarist of The Cult, has placed his glamorous oasis in the Hollywood Hills on the market. Plus, A glamorous Mirabella penthouse owned by the late legendary lyricist Hal David.
0
0
0