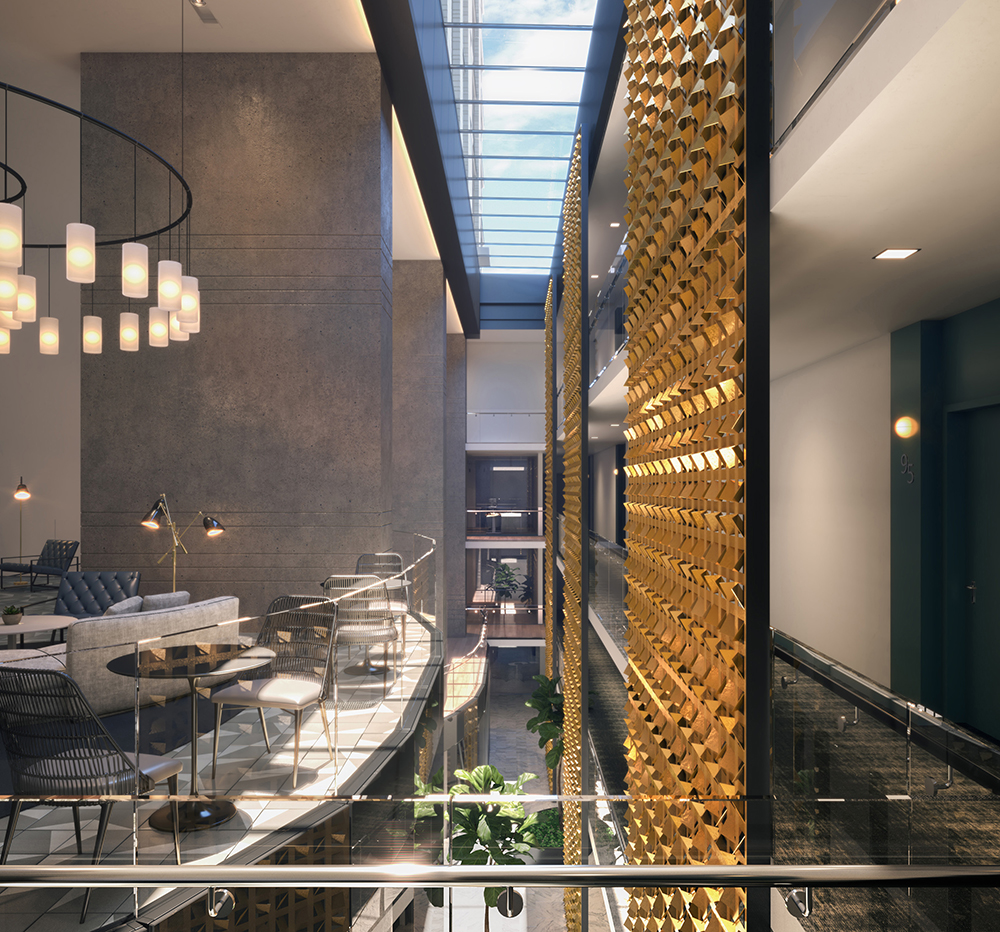 Once a street struggling to survive, Broadway is back and better than ever. Now adding to the historic thoroughfare’s resurgence is the first new large-scale development in more than a century. Named PerLA—Spanish for pearl—the $300 million, 35-story CallisonRTKL-designed condo, residential and business tower promises to be an extravagant and stylish discovery in the heart of the city, much like the precious gem found in an oyster.

“Under Bringing Back Broadway—a recently completed 10-year initiative spearheaded by City Councilman José Huizar—the area has experienced a surge in new development,” says Hamid Behdad of developer SCG America. “This project will be a catalyst for further redevelopment in the neighborhood, as well as an integral part of [the] plan to revive this historic corridor. The project will also finally fill a void in the market by catering to first-time millennial homebuyers.”

Situated at 400 S. Broadway St., on the corner of 4th Street—on a .85-acre parcel that previously held 1980’s-era retail storefronts—PerLA on Broadway will offer 7,000 square feet of ground level retail and commercial space, as well as 450 residential condo units ranging from 400 to 1,300 square feet, priced from the mid-$400,000s. Groundbreaking was held in late September, with the project slated for completion in 2020. Presales are set to begin in spring 2018.

“HBA’s finish selections incorporate creative ways to utilize classical materials in a contemporary application,” says HBA associate Richard Tennill. “Luxurious veined marbles laid in a playful manner share the space of the lobby with textural painted corrugated metal panels expanding the full height of the space. Rich wood floors fold up the walls to create a wainscot element, which in instances, creates a ledge or hides warm LED up-lighting. Patterned tiles create graphic repetition in an art-deco manner, yet with a contemporary look.”

Other standouts at PerLA on Broadway: 48,000 square feet of outdoor space spanning the roofs of the lower podium and tower. There one will find a pool deck offering sweeping views of the city; decks and kitchens; cabana lounges and seating areas; and fire pits and grilling areas. There’s even a dog walk, complete with an owner’s lounge and grooming station.

Explore Story
The lavish interiors of this meticulously crafted residence offer up a wealth of savvy building touch on the…
0
0
0
Explore Story
Market Influencer: Gayle Probst It’s one thing to reach the top of your field, quite another to stay…
0
0
0
Explore Story
A WONDERFUL  ABODE $47.9 MILLION 918 N. ROXBURY DRIVE BEVERLY HILLS 8 BEDROOMS 14,422 SQ. FT. ON AN…
0
0
0
Explore Story
Bel-Air’s Chartwell Estate hits the market at $350 Million Written by Alisha Henson Recognized as the crown jewel…
0
0
0