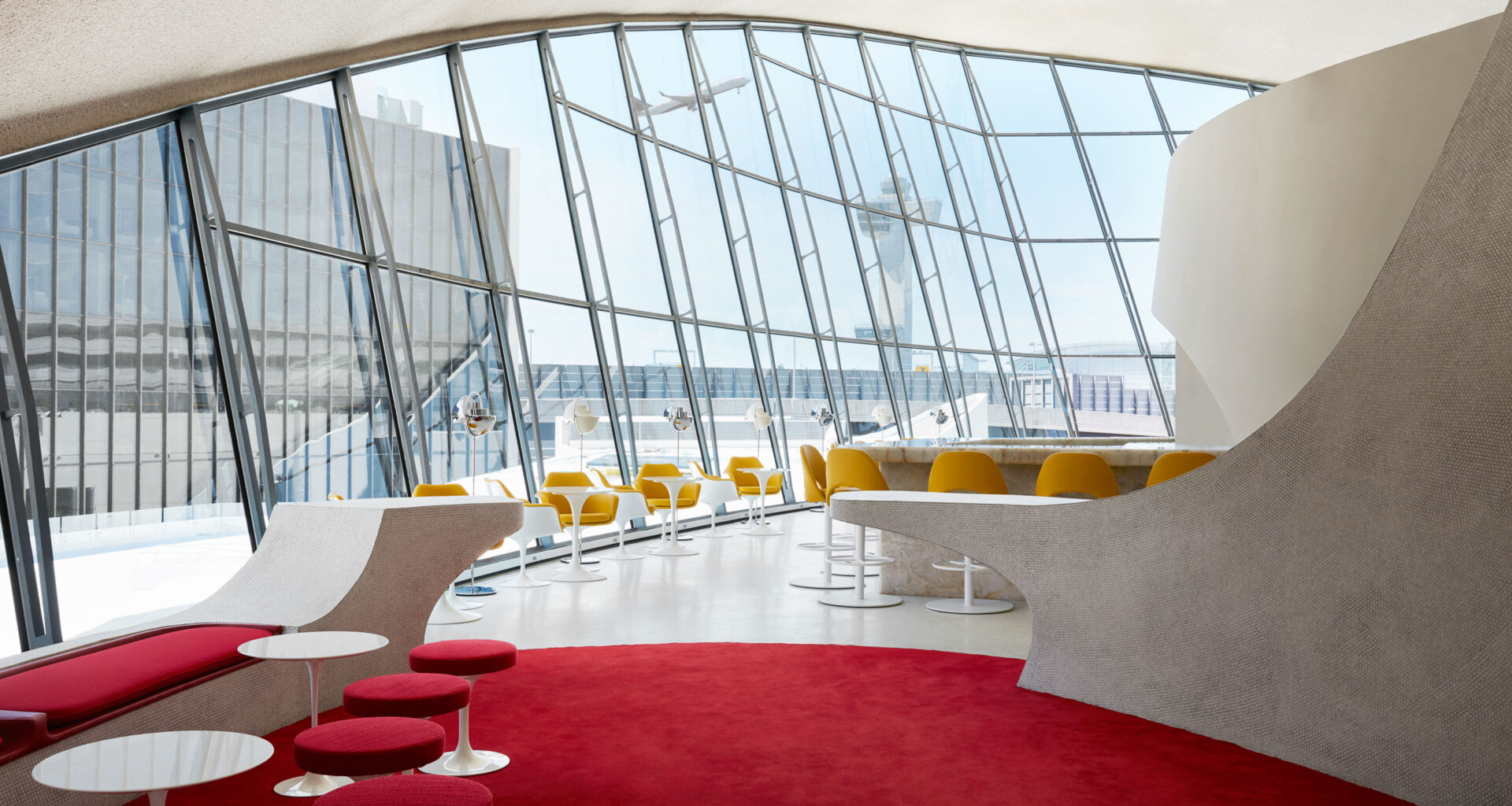 At the midpoint of the 20th century in this country, few figures were as high-flying as billionaire business magnate Howard Hughes, who brought his flair for Hollywood drama to the world of aeronautics and took control of the major American carrier Trans World Airlines (TWA) in 1939. It was Hughes who tapped pioneering Finnish-born architect Eero Saarinen
Total
0
Shares
0
0
0

With an architectural icon by Eero Saarinen at its heart, the new TWA Hotel has landed

At the midpoint of the 20th century in this country, few figures were as high-flying as billionaire business magnate Howard Hughes, who brought his flair for Hollywood drama to the world of aeronautics and took control of the major American carrier Trans World Airlines (TWA) in 1939. It was Hughes who tapped pioneering Finnish-born architect Eero Saarinen to design the TWA Flight Center, its transatlantic hub, at John F. Kennedy International Airport in Queens, New York. To say that Saarinen earned his wings is an understatement—the arms on either side of his space-age form fanned out as if to suggest the whole thing might just take off.

When this fine example of Futurist design opened for business in 1962, times had changed. Hughes had given up control of TWA and Saarinen’s building was nearly outdated, ill-equipped to handle the amount of passenger traffic. This unfortunate fact necessitated a series of improvements to the building, including the addition of a corridor to whisk jet-setters out to the tarmac and to increasingly large planes like the flashy 707. With the advances in air travel, it was only by some small miracle that Saarinen’s architectural emblem of sixties-era swagger escaped demolition. By 2001, however, the building shaped like the future was a landmark with the lights off.

Earlier this year the former TWA Flight Center, now listed on the National Register of Historic Places, was thrust back into the spotlight as the centerpiece of the new TWA Hotel, a gleaming (and mammoth) 392,000-square-foot project whose many players include MCR and MORSE Development, and collaborators Beyer Blinder Belle Architects & Planners, Stonehill Taylor, INC Architecture & Design, Front Inc., Arup, JB&B and Turner Construction Company.

Plans called for restoring Saarinen’s beloved building and, behind it, constructing two other structures of low-rise posture synonymous with midcentury-modern design. Housed within these buildings, which connect with the terminal through the original red-carpeted flight tubes, are the hotel’s 426 guestrooms and 86 suites, spaces that offer superlative quiet via specially designed 4.5-inch thick windows (the second thickest windows in the world). Along with this forward-thinking convenience are period touches that evoke an earlier era of glamour: a bold primary palette, clean lines, and Knoll and Eames furnishings.

It’s all very Frank Sinatra’s “Come Fly With Me,” but the hotel skirts nostalgia in ways that are important and contemporary to today’s travelers. At 10,000 square feet, the fitness facility is a shining example; billed as the world’s biggest hotel gym and equipped accordingly, it is open 24/7. Also on-site are six proper restaurants and eight bars, including the Paris Café by Jean-Georges Vongerichten.

Most spectacularly (should one still be grieving for Mad Men) is the vast observation deck, which is straight out of central casting with terrazzo and stainless-steel materials and an infinity pool. This substantial outdoor space is appointed with a Gerber Group concept, as well; this is the Pool Bar, where one is quite inclined to pull up a period stool by Bertoia and have for a drink. Afterward, perhaps, take a dip in the pool’s heated waters in view of the JFK runways—dreaming, no doubt, of exotic destinations ahead. It’s not first-class at the TWA Hotel, it’s world-class.

Explore Story
“It’s been fun putting the project together because it’s such a nice piece of architecture,” says tradesman and…
0
0
1
Explore Story
Set on creating a faithful rendition of the architectural style, they carefully decked the property with bona fide features: cacti on the front lawn and thick roof beams (also called vigas) along the roofline with antique wood details throughout. They also managed to infuse the sprawling home with classic California Coastal features and unexpected, family-friendly twists.
0
0
0
Explore Story
This coastal ranch estate is where to stay in Santa Barbara and affords a refuge from the noise and stress of the city
0
0
0
Explore Story
On rare occasions, a home actually has a voice, one that speaks at every turn. This voice conveys…
2
0
0