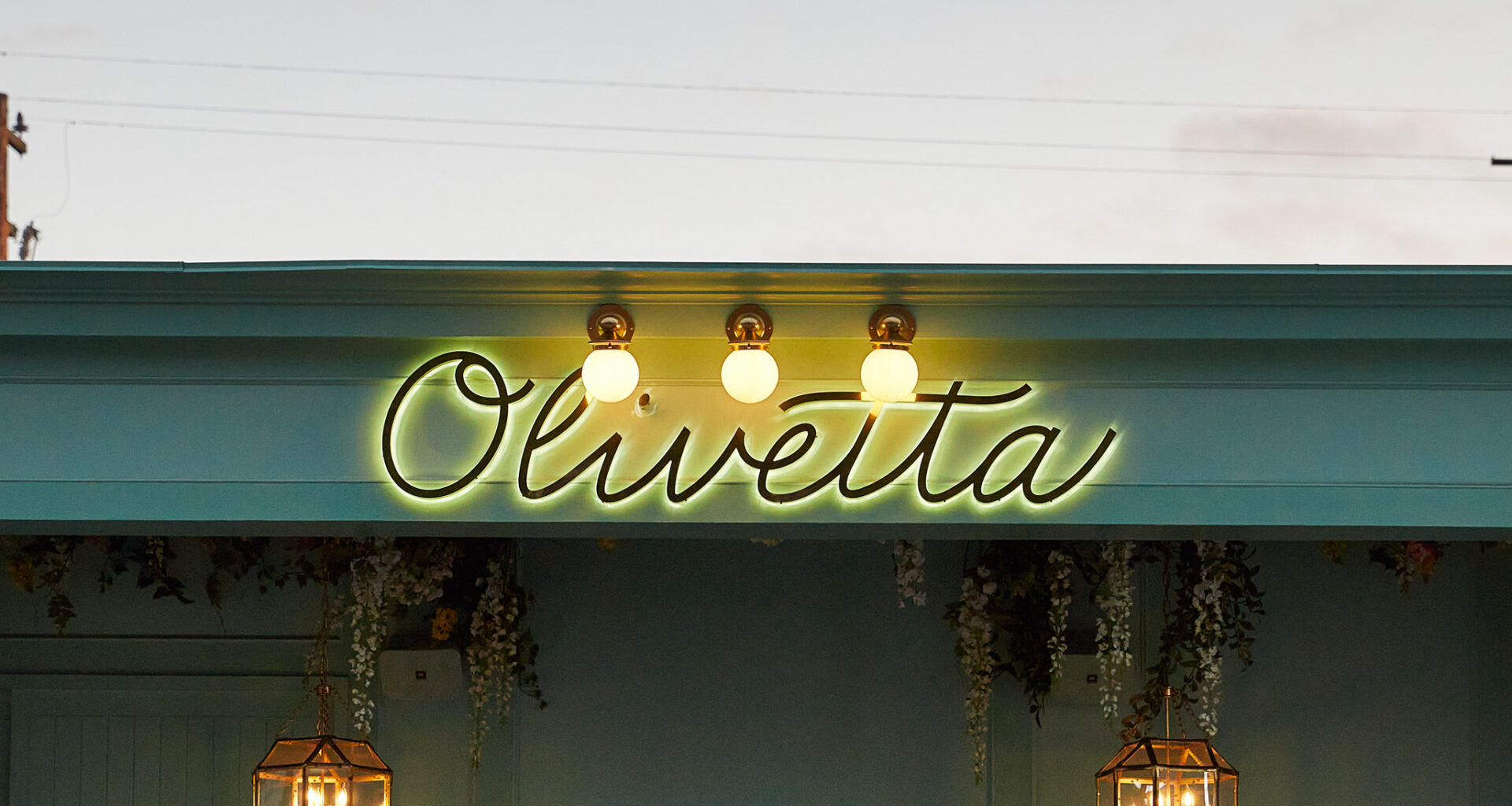 Located on the edge of Melrose Avenue, Olivetta is the perfect spot no matter the time or occasion, whether that is weekend brunch, early evening drinks, a delicious dinner—thanks to acclaimed Los Angeles chef Michael Fiorelli—or a night at the bar and cabaret with live music. European-inspired with a Californian twist, the decor reflects this variety, while still feeling cohesive.

“The storefront features a terra cotta walkway set below a planted ceiling, which leads through the large glazed front door and into the lounge bar area,” Tom Parker describes.

“Once inside the restaurant, all four of the main spaces are visible. To the left sits the sun-drenched courtyard with its ceiling of vines growing across the space, on the far side of which is the feature marble fireplace. To the right, the pill-shaped bar breaks the boundary line between lounge and bar, with both these spaces wrapped in slate blue mohair wall panels. Towards the rear of the space sit the formal dining room and the bar area with a large mirrored back bar. Each of these spaces has its own character and feel.”

“The intention was to create a series of spaces which drew heavily from the sun-drenched richness of the south of France while also being highly theatrical and almost so over-the-top,” says Tom Parker, co-founder of Los Angeles and London-based architecture and design studio Fettle, which specializes in hospitality design.

“This, combined with a very carefully planned layout and flow between the rooms, should allow patrons to let their hair down in a series of great spaces which don’t take themselves too seriously.”

Finding the right balance between all the atmospheres was one of the biggest challenges, yet achieved through the design elements. “Lighting design played a big part in our approach to creating a constantly evolving experience for the user within Olivetta,” Tom Parker explains.

“The key was to create a fresh space in the daytime, particularly in the courtyard, and then a more moody and atmospheric space at night.”

Color varies but also provides a sense of flow: shades of white, pastels and tone-on-tone pattern for the Mediterranean-inspired courtyard; blue mohair through the wall paneling, offset by a warm orange banquette and bold paintings and illustration from local artists in the lounge; and gold via a custom wallpaper design by Adam Ellis Studio in the restaurant.

“The materials were chosen to give the space an Old World feel, drawing from the early 20th-century destination hotels of the south of France,” Tom Parker adds.

“Wallpapers, velvets and patterned fabrics sit alongside deep, rich leathers in order to give the space a sense of age and history.”

The combination of influences is also reflected through the furnishings and lighting, from individual lamps custom-made by Lusive in East Los Angeles, and a courtyard chair from Serena & Lily, to furniture designs based on the 1920s and 1930s European pieces with a modern touch.

In a final appraisal of the space, Tom Parker describes Olivetta as “an exuberant and whimsical series of spaces which mix the Old World elegance of the Mediterranean with the playful frivolity of West Hollywood.”

Explore Story
Raised among artisans in a creative community in coastal Maine, Caroline Cecil learned to paint from her grandmother, and it’s been bold strokes ever since. “Looking back, it’s clear to me that textiles was always my calling,”
0
0
0
Explore Story
Having originated in 17th-century Europe, Baroque style adds a feeling of opulence to any room. Rich finishing, curving…
0
0
0
Explore Story
At Naja’s Place, you’ll find plenty of your South Bay compadres taking it easy, aided by 88 exotic beers and ales on tap (many from nearby breweries), flaming Buffalo wings and nicely stacked burgers. If you like the idea of taking a local breather, ideally near the water and definitely with beer involved, head to the northern tip of the King Harbor boardwalk.
0
0
0
Explore Story
From a tour of the iconic architecture in the bohemian beach community of Venice to a glimpse inside the studios of some of L.A.’s emerging and leading artists—not to mention a special dinner and private concert with a renowned musician—the sixth-annual Venice Design Series…
0
0
0