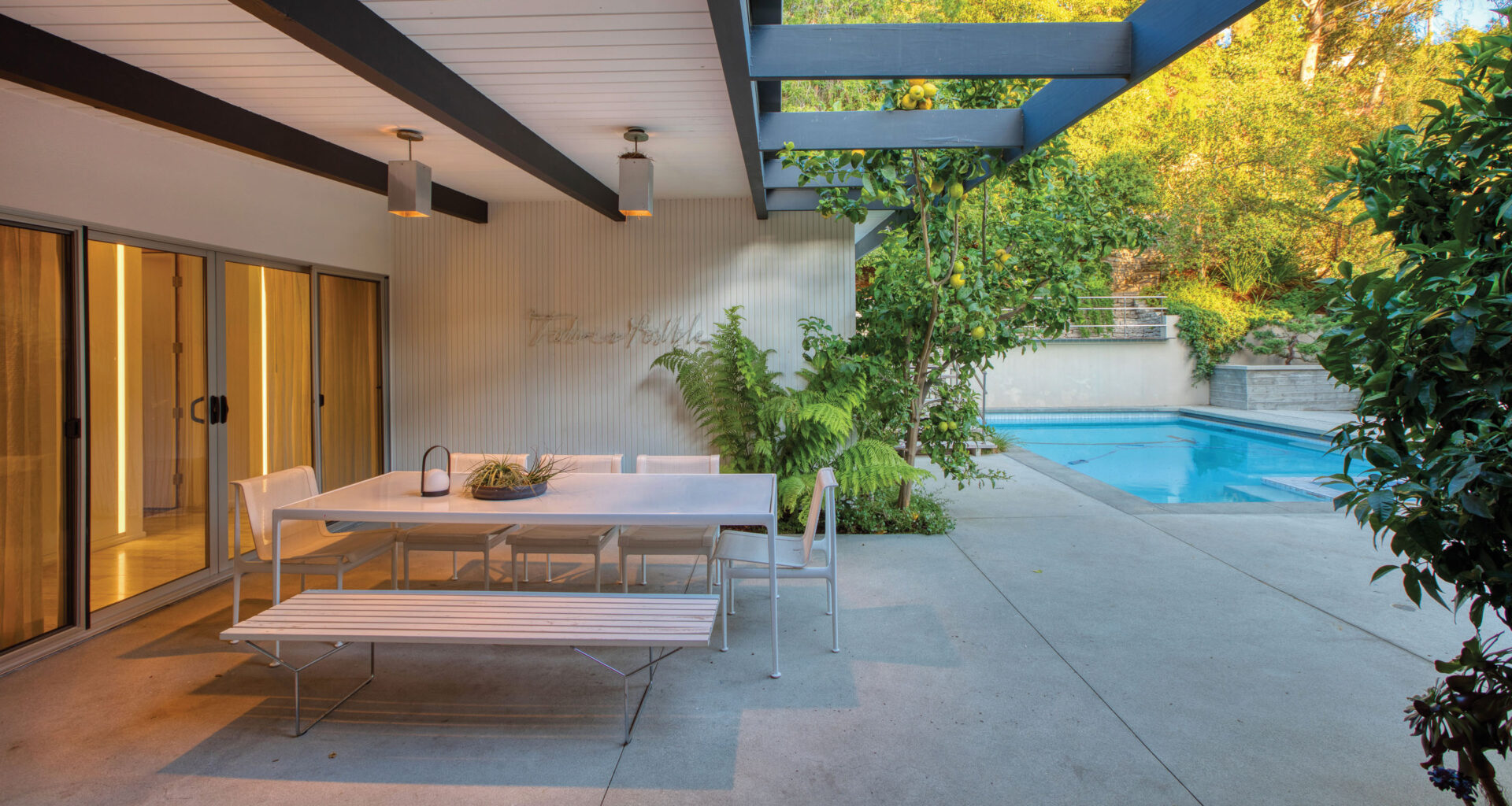 An Architectural Stunner Tucked Into One of Brentwood’s Best Streets, 830 Leonard Road an Exquisitely Updated Mid-century Home, With Its Stunning L-shaped Pool, Is an Invitation to the Good Life

Ideally situated to enjoy the best the city has to offer, Brentwood exemplifies the good life in Los Angeles. The neighborhood’s shine seems to emanate from every facet, from the gleaming late-model SUVs to the popular shopping and cafe clusters of San Vicente and Montana Avenue. And bordered by the 405 and the 10, its access to the rest of the city’s highlights is unparalleled.

Skim along the north of this lush cornucopia, swooping along Sunset Boulevard and up Kenter Avenue, towards the Santa Monica Mountains, and past Kenter Canyon Charter School, one of the jewels in LAUSD’s crown and onto a quiet cul-de-sac. The serene drive does nothing to prepare you for your destination—830 Leonard Drive, a spectacular example of the mid-century modern style that flourished in Southern California and introduced the concept of indoor-outdoor living presented by Sarah Knauer of Amalfi Estates.

Its beautiful lines, reminiscent of the architecturally significant homes found in Los Angeles’ older Eastside enclaves of Silver Lake and Los Feliz, stand out among its more conventional neighbors, drawing murmurs of appreciation even before you step inside.

Originally built in 1959 by self-taught architect, David Tenneson Rich, known for Ursa Major, the arresting Bel-Air abode he constructed for basketball legend Wilt Chamberlain, this home has a similar language with high ceilings and skylights flooding its rooms with California sunshine. Rich’s impeccable work was restored under the aegis of the current owners, who said, “We wanted someone who would approach it with integrity.”

They drafted architects Alice Park and Michael McDonald of Park/McDonald, justly celebrated for their work on such gems as John Lauter’s Schaeffer House in Glendale and Frank Lloyd Wright‘s La Miniatura in Pasadena, to craft a thoughtful renovation that would update the home while leaving its stunning details intact.

The artfully updated kitchen, which, while fitting seamlessly into the home’s milieu, was designed for modern life. Miele appliances, a Sub-Zero refrigerator, Dornbracht fixtures, an impeccably designed pantry, and an extra-large island with plenty of seating, invites home and professional cooks alike to flex their culinary muscles within its well-conceived open-plan footprint.

A small desk at the bottom of a nearby staircase that leads up to the family room, painted in Farrow & Ball’s Bainbridge Blue 749, offers a central station for paying bills and storing cookbooks. Lit by a sconce from Atelier de Troupe, its drawer conceals a charging dock. A plush built-in banquette whose blue seats hide extra storage is a cozy option for light meals and snacks. A laundry room nearby is positioned to accept wet bathing suits and towels.

You’ll appreciate these thoughtful touches the moment you glance through the kitchen’s windows and see the backyard. Its breathtaking L-shaped pool, at the center of an expansive patio with plenty of room for lounging, will prompt you to consider plans for parties, large and small. The home’s west side gate welcomes visitors directly into the backyard. Place the barbecue in the nook just outside the kitchen to ensure guests can grab grilled offerings as they enter.

The bridge over the pool, meanwhile, leads to a beautifully landscaped pathway that winds up the mountain slope offering plenty of secluded built-in benches for private conversations while looking out over the activities in the pool below. A sauna promises warmth after an afternoon of water polo, belly flop contests, and races.

There’s room for a dining table here and, given Los Angeles’ temperate climate, eating outside makes even everyday meals feel like a special occasion. The outdoor fireplace, finally, promises that festivities can continue even as the chill of evening descends.

In colder weather, welcome friends through the home’s main entryway and into the formal living room, where a fireplace beckons them to gather. With its high ceilings and glass walls that open to a private side patio, it’s a cozy retreat in the evening. The rustling of the trees overhead offers a soothing soundtrack to late-night conversations fortified with good wines.

Leave the sliding doors to the master bedroom suite open at night and nature’s music will lull you to sleep. A generous bathroom, with a long counter to hold all the products you picked up at Brentwood Village, and a walk-in closet adds to this area’s allure.

Three junior bedrooms, with a shared bathroom, are clustered down the end of the hallway. One, which opens directly onto the pool, would be an ideal hangout space for teenagers. Don’t be surprised, however, if on rainy days the kids commandeer the family room at the top of that turquoise staircase. With its treetop views, they’ll happily spend hours up here. (Secluded from the rest of the home, it would also make a great office or a private master bedroom suite.) One of the delights of this home is that its well-considered configuration can be reimagined as the kids grow, with parents near their children when they’re younger, then, as they mature, providing space for all parties.

In the morning, after an hour of “hanging ten” in Malibu—the drive to the beach, against traffic, puts you on the water in 20 minutes—you arrive home, your boards slotting neatly into the fence’s racks. You dive into the pool for some laps, then warm up with a few minutes in the sauna. When you emerge, the family’s just beginning to stir.

Gathered for breakfast in the kitchen, one child on a stool at the island, another at the banquette, your spouse wondering who fed the animals, it hits you. This is the real definition of home—a warm, enveloping, and intimate space with everything you could possibly want within easy reach.

Explore Story
Located on a bluff that puts the entirety of the coastline within view, from the Queen’s Necklace to…
6
0
3

Explore Story
Tucked away in privacy, at the end of a long driveway, is a bona fide Modernist estate at 6110 Via Subida. Approximately 6,646 square feet in size, the generously sized residence is faithfully designed in the Modernist tradition.
0
0
0
Explore Story
Noteworthy is the property’s remarkable size: the home is 12,000 square feet, and situated on 3.5 acres. And its views, which include a distinctive panorama made possible by the property’s high vantage point and location. Look north or south, and the sights are inspired and always changing.
0
0
0
Explore Story
Whether basking in sun or shrouded in shade, small environments made spacious present a case for cabin fever.
0
0
0