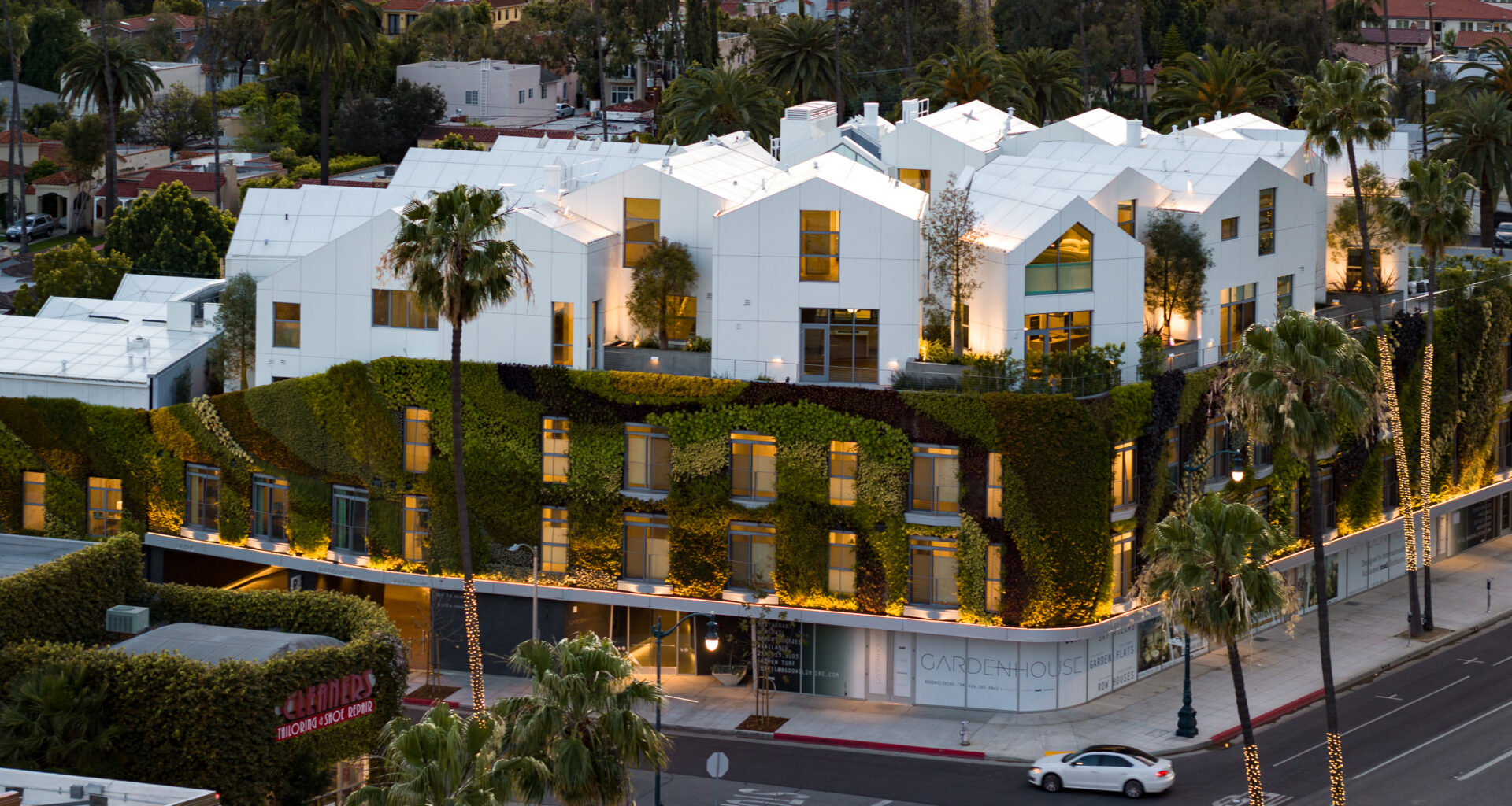 In addition to its airy and contemporary apartments, penthouses, and townhouses (ranging from $3.5 to $5.5 million), Gardenhouse has the nation’s largest living art wall at 6,700 square feet.
Total
1
Shares
1
0
0

Located at 8600 Wilshire, Gardenhouse is the first residential development in the U.S. by Ma Yansong, founder of MAD Architects, who collaborated with Los Angeles-based Gruen Associates. The interiors were designed by Rottet Studio. “This is the first time that we are bringing the ‘Shanshui City’ design philosophy to North America,” Ma Yansong says.

“This approach which underlies my work is derived from the East Asian perception of a world that is imbued with a particular affinity for nature. This abbreviated manifesto on Shanshui philosophy combines the functionality of urban density with the artistic idealization of natural landscape to compose a future city—one which maintains human spirit and emotion at its core.”

The unique character of this project, however, doesn’t stop there. Created by Scott Hutcheon, founder of Seasons Landscaping, this element aims to connect people and nature in the heart of an urban environment. “The way the green wall is designed into the Gardenhouse architecture puts it on center stage,” Scott Hutcheon says.

“The wall covers the entire façade, spanning two distinctly different microclimates and sun aspects. Stanley is east-facing, getting a good amount of sun, and Wilshire is more north-facing, getting all shade.”

Defining the perfect vegetation was key to creating the wall, which comprises over 40,000 individual plants of 30 different varieties with an 8,000-gallon tank—making it the most water-efficient green wall system in the world.

“For the Stanley side, we used a lot of succulents like jade, Crassula, dwarf carpet of stars and Aeonium as well as some sun-tolerant ferns,” Scott Hutcheon describes. “For the Wilshire side, we chose a lot more tropical-style, larger leaf shade-tolerant material like Fatsia, Schefflera, ferns, Ficus decora, and spider plant.”

Balancing beauty and function, the living wall creates visual impact and transforms the Beverly Hills streetscape, acting as a vibrant piece for the residences’ façade. Designing and installing such a large-scale project was no easy task for Scott Hutcheon and his team.

“There are many elements that we had to encase in our Aquafelt system like balconies, windows, vents, etc.,” he confesses. “We have a detail in our installation that takes care of drainage and irrigation at each one of these. A lot of time and care goes into the technique of our installation so that all of the hydraulics are seamless and the system functions properly, giving the right amounts of water at all the right spots.”

An efficient maintenance process, and several techniques in particular, will ensure this exceptional creation will be long-lasting. “Cleaning out the troughs of leaf debris is the largest task,” Scott Hutcheon explains. “We also monitor and adjust salt and pH levels in the tank, and we add nutrients to the water as needed throughout the year.”

Whether it is a garden on the ground, on the roof, or on the wall— like this one—some commonalities exist in every landscaping creation.  Choosing the right plants for a specific microclimate, and understanding the amount of sunlight and shade from surrounding elements are two such considerations. “Our system is light and flexible with our Aquafelt layers,” Scott Hutcheon adds.

“The textile layers take the place of soil over time, allowing the plants’ roots to travel throughout the entire expanse of the green wall, which creates its own ecosystem on the wall. Felt layers wick nutrient-rich water 100% throughout the entire wall and they breathe oxygen very well to the root zone. These are the factors that literally pump the plant up each day allowing for optimal horticulture success on a vertical facade.”

Always wanting to bring a sense of well-being through his realizations, Scott Hutcheon has achieved exactly that at Gardenhouse through what has already become an evolving art piece.

“The windows of the villas open up onto the living green wall, giving people the feeling that they are living in the mountains, in a hillside village, and not in a metropolitan city,” notes architect Yansong. According to Richard Riviere, founding principal at Rottet Studio,” Gardenhouse is an expression of what we’ve always known in California but is missing in the modern world—a healthy, holistic lifestyle.” Represented exclusively by Fredrik Eklund, Jenny Ting, and Anthony Barillo of Eklund | Gomes Team

Explore Story
Poised along the coastline, overlooking a green golf course and with epic ocean views—it’s hard to imagine a Southern California vacation home more enticing. Add cuisine, a world-class spa and collection of pools within a short distance by foot, and Terranea’s Villas are unlike anything else in our midst.
0
0
0
Explore Story
Kick off the season of giving with Sandpipers 24th Annual Holiday Home Tour Written by Joclene Davey |…
0
0
0

Explore Story
Boutique real estate agent Teri Hawkins on the satisfaction of 25-plus years of selling real estate in the communities she calls home—Palos Verdes and the Beach Cities.
0
0
0
Explore Story
Expertly reimagined and expanded, this romantic Spanish-style home now on the market in Santa Monica boldly breaks from the norm.
0
0
0