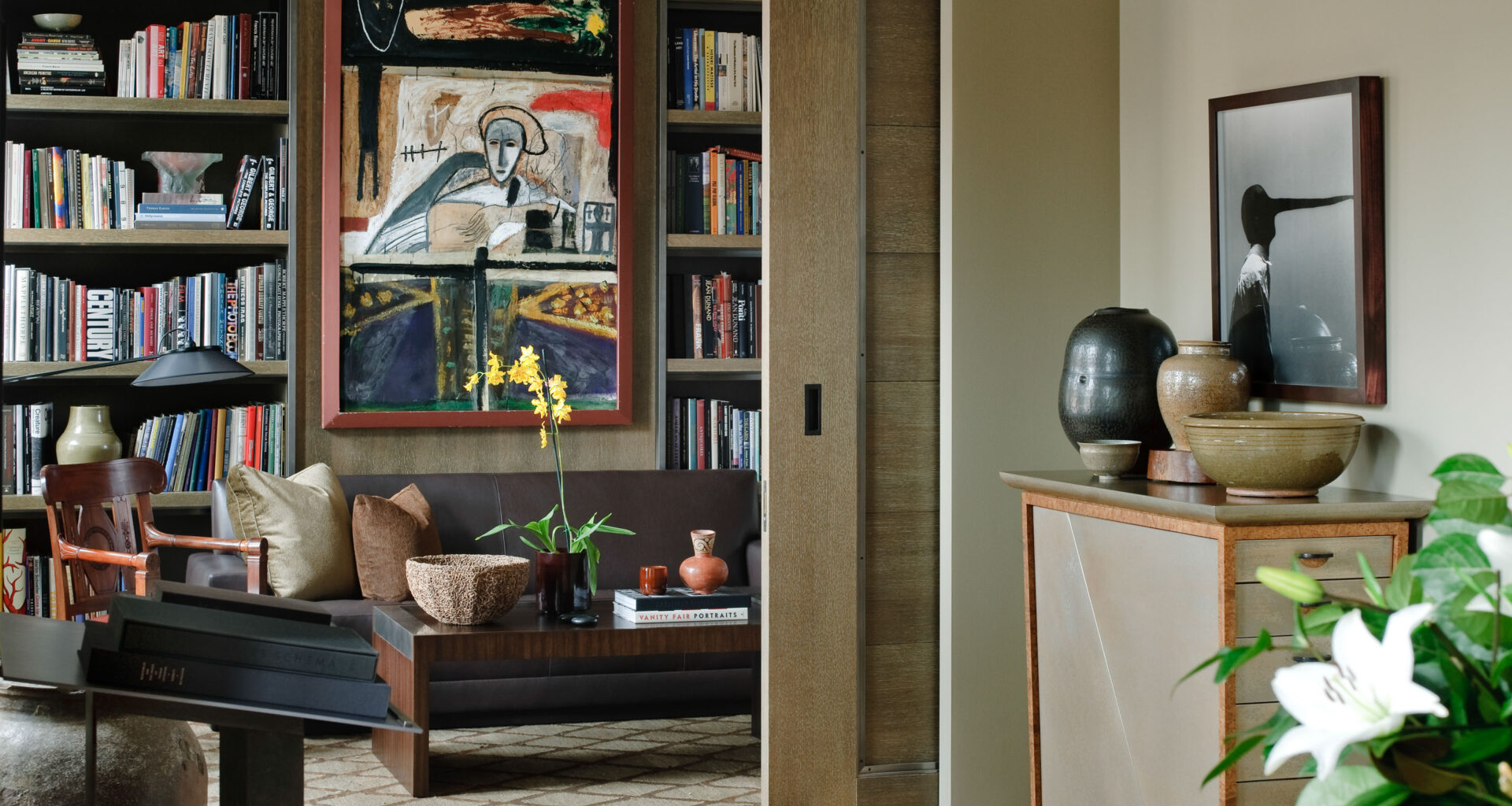 Specializing in interior design, interior architecture, and furniture design, Terry Hunziker has lived in this apartment—located in downtown Seattle, in the historic neighborhood of Pioneer Square—for almost 24 years.

It is nestled in a brick building designed between 1892 and 1896, which housed a hotel for years; in 1995, it was transformed into condominiums with the addition of a fourth floor that allowed for rooftop garden spaces.

When Hunziker visited the apartments on the third floor—which all have two stories—he saw the potential immediately. The high ceilings (11 feet on the lower floor; almost 10 feet on the upper) and spectacular views of the Seattle skyline from the terrace convinced the interior designer, who reshaped the space during an eight-month renovation.

“I envisioned two units, side by side, to be opened up into one with reconfigured space,” Hunziker says. “One very important detail was to turn six double-hung windows facing the city into a second set of steel French doors.

By adding a steel beam detail above each window and a lower translucent glass panel at the bottom, the feeling of these windows now had that of a more industrial factory look: taller and narrower than the actual building windows.” In 2006, he added a third apartment and integrated it into the mix.

All areas were reorganized and delineated through the use of different materials such as cast concrete pavers and a terracotta Venetian plaster freestanding wall that acts as a partition for the entry. Blackened steel embedded runners visually divide the long dining gallery from the living room.

“The idea was to use contrasting colors, values, and textures, all fairly earthy tones from black to a kind of celadon beige, to off-white ceilings,” Hunziker explains. “My home is comforting, and given the gritty and extreme activity in Pioneer Square, it is like walking into another world, quiet and serene.”

After living here for over two decades, Hunziker, though he still loves his apartment, makes changes on a regular basis. For example, he plans to install a deeper and warmer oak floor, and possibly lighter plaster walls. “It is very much my design lab and I use some of its elements in my work with clients as well,” he confesses.

One of the most used pieces of furniture in the apartment is the dining table, where the interior designer sits, draws, reads and takes phone calls. The master bedroom suite, which has no doors and looks out to the terrace, is Hunziker’s haven of peace.

“The design of my home reflects my personality in that I am a collector of sorts: art, furniture, objects, and books,” explains Hunziker. “I like order and serenity and even though there are many things in my space, it doesn’t feel cluttered or unfocused.”

In his own space, Hunziker played with contrasts in many ways—between light and shadow, soft and raw, bright and matte—creating a perfect refuge to stimulate his creativity. terryhunziker.com

Explore Story
From painstaking attention to detail to captivating lake views to impressive amenities and more. Definitely a one-of-a-kind personal retreat, this castle-esque property also offers the ultimate in privacy, ideal for detaching from the rest of the world.
0
0
0
Explore Story
When leaving Manhattan Beach and heading south towards Hermosa Beach, there’s a distinctive four-corner crossroads—it’s sprinkled with shops and neatly equidistant, about a mile each way from the lively downtowns and piers of each beach town.
0
0
0
Explore Story
The iconic Kaffirboom coral trees that stretch over the residential streets of the northern end of Santa Monica telegraph the area’s unerring elegance and quiet grace.
0
0
3
Explore Story
Pair soaring unobstructed ocean views from a walk street corner lot in Manhattan Beach with a stunning modern…
1
0
0