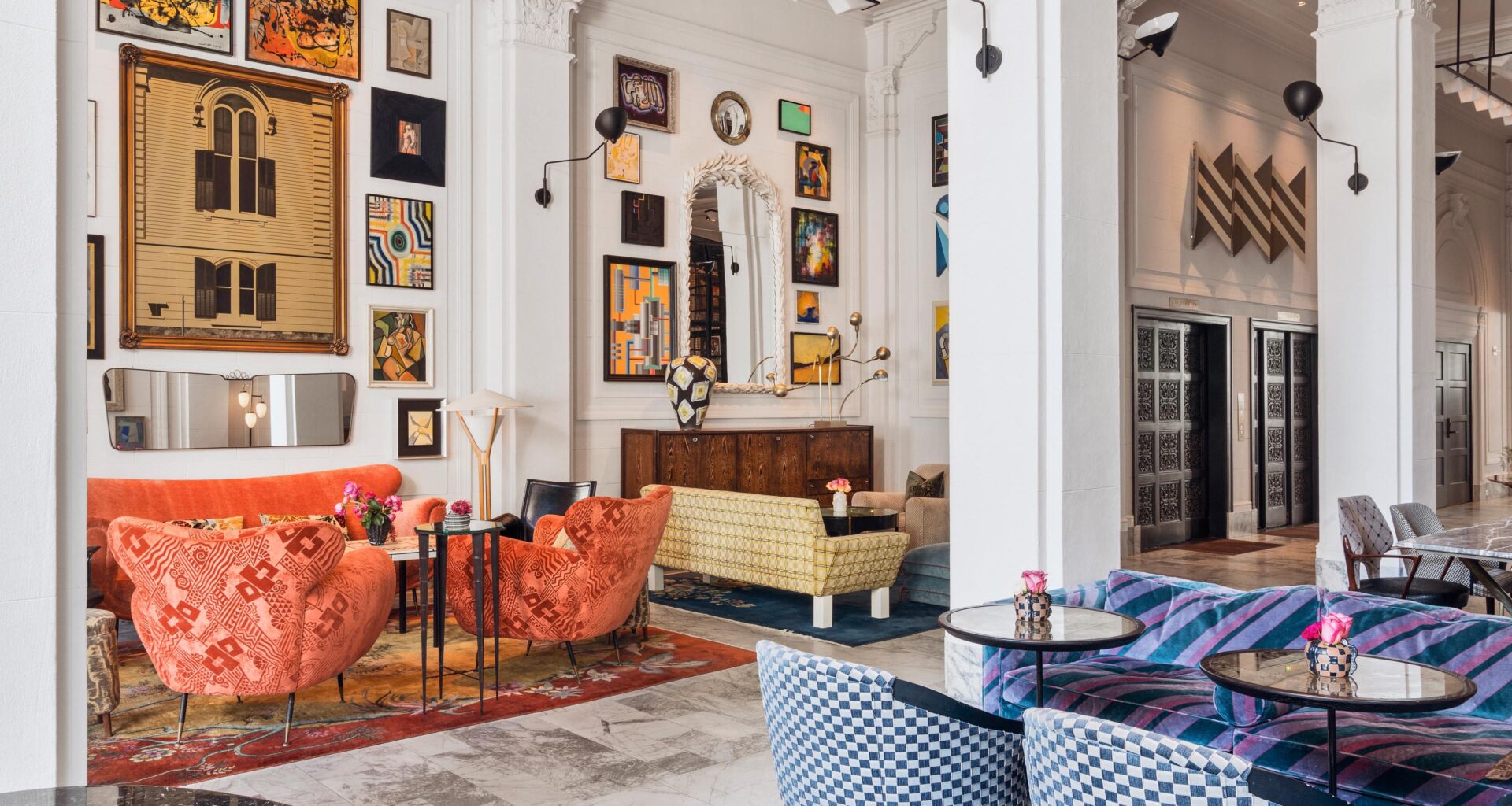 That Bay Area has become the worldwide reference for innovation and technology. The whole planet constantly observes what happens in Silicon Valley to better understand how the future will be shaped. The bohemian tradition, cultural history and European influences, however, live on in San Francisco. Reminder: the stunning San Francisco Proper Hotel.

Nestled in a nearly 100-year-old Beaux Arts building, the hotel, opened in 2017, is an ode to the city. It is located in an area with old theaters and arts institutions that is currently enjoying a revival, with luxury residential projects and offices from large companies making their home here. Forgotten for years and then damaged by a fire, the hotel’s building was reimagined with the objective of contributing to the local community’s development.

On the exterior façade, real estate investment and management company The Kor Group took care of every detail. Inside, Kelly Wearstler designed sophisticated spaces with references to several artistic movements. “While carefully preserving the original elements of this classified landmark, we looked to bring something new to San Francisco by collaging a reimagining of past, present and future,” said Wearstler. “The spirit of pre-modernist European influence, hand-selected vintage furnishings, and works by local artists are all part of the warm, inviting design mix.”

Shaped as a welcoming space for guests and a meeting point at the same time, the lobby was restored by craftsmen who used traditional techniques. Inspired by a classic European salon and reflecting a residential atmosphere with cozy nooks and a lounge, this area transitions into the intimate Villon restaurant—named for the French painter Jacques Villon. Among cubist decor, chef Mikey Adams creates contemporary American cuisine with unexpected twists, following San Francisco’s culinary tradition.

Crafted by Josh Harris and Morgan Schick from BVHospitality, the 7×7 cocktail menu comprises seven categories with seven cocktails in each category, with a playful nod to the area of San Francisco (7 by 7 miles). A selection of beers and wines is also available. The ground floor of the hotel also hosts La Bande, (meaning a group of friends in French). Decorated with graphic black-and-white stripes, the coffee shop features house-made pastries, sandwiches and salads in a casual environment. Rooftop bar and lounge Charmaine’s, meanwhile, is one of the best spots to enjoy a 360-degree view of the city on the expansive terrace. For the interior space, Wearstler took inspiration from the Viennese Secession art movement.

Both chic and functional, each one of the 131 rooms of the hotel seems to be a pied-à-terre, where a downtown vibe combines with classic French and Italian details. Previously known as the “Paris of the West,” San Francisco has forged its own identity, mixing the best of Europe and the United States. And this hotel is certainly a good reason to discover—or rediscover—it.

PHOTOGRAPHS: BY MANOLO AND NOAH WEBB, COURTESY OF KELLY WEARSTLER