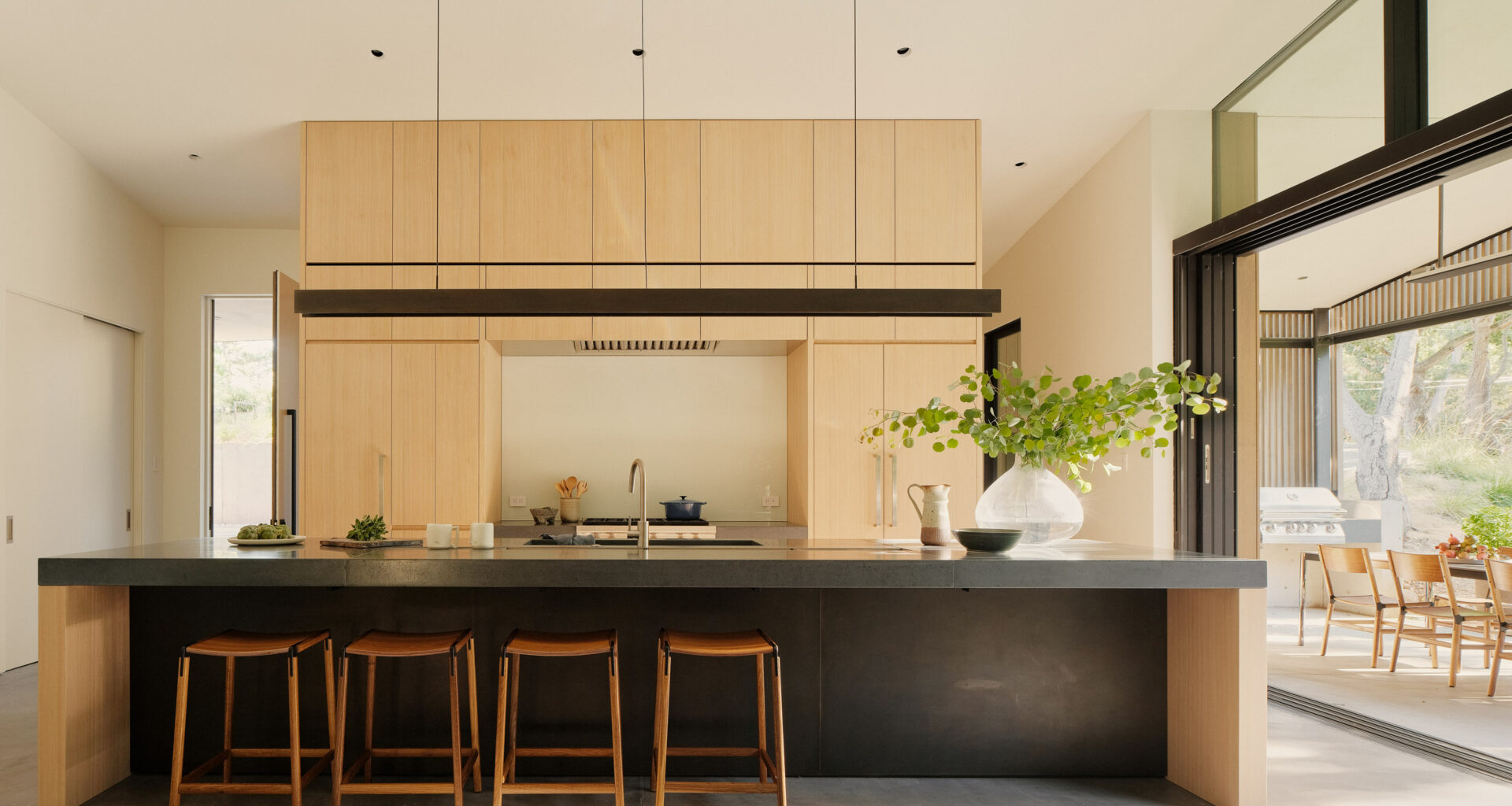 Dawnridge, a house with a slow, transcendent dimension to counterbalance the bustle of Silicon Valley, and utterly suspicious of ornament, is rewilded to the environment by Field Architecture.
Total
0
Shares
0
0
0

A building of great virtue and intentional thinking, the exquisitely drawn Dawnridge defies predictable notions about the architecture one expects to find in a largely unadventurous Silicon Valley suburb. A paradox in its relentlessly fast broader context, the 5,000-square-foot ranch expresses a rigorous fidelity to nature shared by the California practice behind it, Field Architecture.

The father-son firm, co-captained by South African-born architects Stan Field and Jess Field, was founded on the simple interest of deepening the connection between people and place, with every project a fresh exploration of this idea, culminating with clarity and narrative in Dawnridge.

Conceived as a tranquil haven for its homeowners—tech workers with a passion for global travel—Dawnridge also prioritizes their connection to the outdoors so that they might live with the landscape, not apart from it.

“We felt a calling to not only have the housework in sync with the natural environment but actually use the bigger development of the property as a way to do more,” says Jess Field.

He worked with landscape architect Joni Janecki to contain the construction footprint, support wildlife habitat and the propagation of native plants, and restore a watershed, then reorient the entire project from a suburban plot into an integral part of the larger landscape.

“Working in from the property lines is a very suburban mindset,” says Jess Field, who, part and parcel of the Field Architecture playbook, took the exact opposite approach with Dawnridge, taking down fences to forge a connection with the greater woodland.

“Our goal was to erase the property lines.”

Doing so meant working with significant restraints, including prodigious natural California oaks on the site—none of which were to be removed. This particular hurdle, among many, made Dawnridge something of a moon-shot project, but in choosing to see obstacles as advantages, Field created a uniquely pure architecture respectful and reflective of the environment.

“It may have appeared to many unbuildable,” Field says of the site, which he saw as one community, with the oak woodland—the native backbone of California ecology—and, at the center of the prime buildable area, a giant blue oak that has stood for 200 years.

“We thought, this isn’t an impediment to building, this is the sentinel of the site.” In making space for the tree, which was home to a magnificent hawk, and using it and other assets of nature to inform the architecture, Dawnridge feels deeply organic, a source of both depth and perpetuity.

Upon the approach of Dawnridge, the building pronounces itself as nestled into the landscape. The aforementioned giant oak springs from what appears to be the middle of the house, as if there’s a part of the structure in front of the tree and another part behind.

The different sides of what is a kind of wishbone form follows the geometry of the creek, amplifying the effect of the land shaping the building. That this land is also visible in the building itself is due to the materials—Alaskan yellow cedar and weathering Corten steel that will age gracefully over time, deepening the house’s dialogue with the natural environment—and Field’s rethink of the board and batten siding that is the typical regional vernacular. He essentially eliminated the board and kept the bat to create a single language of material and construction that’s adaptable to different conditions while allowing for natural ventilation and light.

Engagement with the surrounding landscape is a constant theme throughout Dawnridge. Indeed, one senses little separation between the interior and exterior realms. With massive walls of glass on one side and a narrow vertical aperture of glass on the other framing deliberate views of the outdoor milieu, Dawnridge represents the apex of California’s indoor/outdoor lifestyle—the dining room is quite literally outside, for example, while a living area shares space with a rock garden.

“It really is designed to open up and tune in to what’s happening outside that is animated and rich,” explains Field. It may be when the frogs come out or the time of day when the sun shines softest through the vertical slats. Based on one’s position in the house, there is always another view, he adds, “so that over time, you really get to know the individual moments of the landscape.”

Recognized with AIA California’s Honor Award, Dawnridge is legacy work, an example of Field Architecture’s wonderful progression of projects that are unique to their sites and together form a regional expression of how buildings respond to the land of a particular place.

“We really see architecture as something that, if done right, outlives us, and is part of a beautiful cycle of perseverance and sustainability,” says Field. This, of course, is admirable, but for Field Architecture, it’s also second nature.”

Explore Story
That Bay Area has become the worldwide reference for innovation and technology. The whole planet constantly observes what…
0
0
4
Explore Story
The ocean is everywhere—its special light, air and atmosphere are palpable along this friendly street where neighbors gather freely for outdoor gatherings, particularly at sunset.
0
0
0
Explore Story
The Box, a “bubble-like” innovative architectural intervention created to preserve and safeguard the historic Hill House, is an example of classic Glasgow style designed by Scottish architect Charles Rennie Mackintosh. This solution protects the building from environmental elements to prolong its future for generations to enjoy.
0
0
0
Explore Story
Venice Beach artist Charles Lushear handcrafts seriously playful pieces out of exotic wood Written by Constance Dunn |…
0
0
0