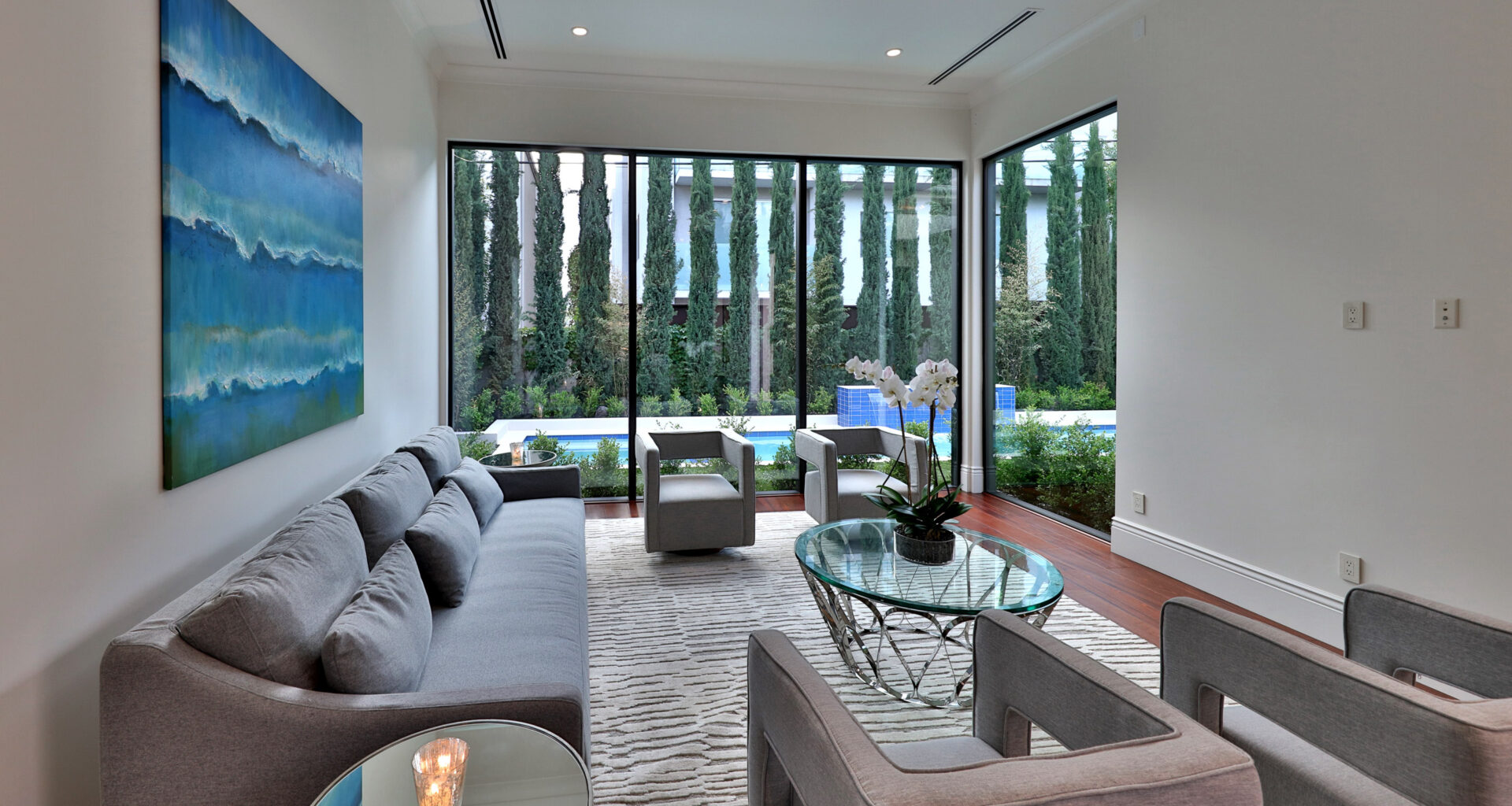 Judi Schindler started spending time in California. The East Coast designer and former finance heavyweight was creating notable homes in the Atlanta area—stately designs filled with classic pieces, often with a Country French flavor. On her trips out West, Schindler became interested in California modern design, specifically the practice of fusing indoor and outdoor living, using streamlined, luxurious decor to create her signature “lifestyles.” Schindler began integrating these and other approaches in her East Coast work, and when her 12,500-square-foot Buckhead residence was featured in Atlanta Homes & Lifestyles, it highlighted just how well Schindler had been able to marry East Coast sensibilities with the West’s warm-weather design principles.

Schindler started spending most of the year in Los Angeles five years back. She continued to design in the same vein at her firm, Chelsea Design Associates, but now in reverse—creating, of-the-moment California residences blended with unmistakably traditional notes. She describes it as a “classically modern look, mixing timeless pieces with cleaner lines” and her latest project, a glamorous residence on a leafy block of North Orlando Street, just around the corner from Melrose Place in the West Hollywood area, is an apt showcase of her style.

At curbside, the exterior of the five-bedroom, seven-bath home is presented in traditional Mediterranean style, down to its clay-barrel roof and creamy stucco exterior. Subtle updates have been made with large-format windows and a 10-foot front French door with black glass panes, topped with a classic black awning.

Where the home departs from the typical script is when one opens the door and finds a thoroughly au courant home. A place where natural light illuminates every room and walls of disappearing glass erode distinctions between interior and al fresco living, opening the home marvelously to the exterior and making the ample floor plan seem even more expansive. “You feel this sense of freedom and air,” Schindler says of the atmosphere when one enters. “When you walk in you can walk right out to the pool.”

At the center of the U-shaped floor plan on the ground level—one of three total—is an outdoor lounge that acts as a central artery of sorts, connecting two of the home’s most important spaces. The first is a living room that feels like a modern-day parlor—an elegant place to establish first impressions. The second is a sleek gathering room that is home to a showcase kitchen filled with designer German cabinetry and Calacatta marble, a sunny dining area, and a family room surrounded by windows. Each space becomes an open-air oasis by virtue of its direct line to the outdoors.

Speaking of the exterior, Schindler has sculpted the yard as carefully as she has the interior space, matching it appropriately to the home’s elegance. The rear grounds, onto which the home opens, is a postcard image of what one might find in a Mediterranean-like climate: manicured green lawn, sculpted rows of Italian Cypress and a slender pool and spa with a central water feature that cascades water and fire. “When you’re in the backyard, you feel like you’re in a villa or a spa,” notes Schindler.

When it’s time to step out, you’re a short stroll from some of the best spots in town. “Walk a block and you’re in Melrose Place,” says Schindler, an ardent fan of the neighborhood, which she likens to New York’s Tribeca. “You can walk to 30 restaurants, Cedars-Sinai, and all kinds of shops and supermarkets in five minutes.” And more, including a stellar Sunday farmers’ market that’s just two blocks away. “Where in L.A. can you walk everywhere and do everything?” It’s a big advantage of the home, especially given the state of L.A. traffic, and echoed by real estate agent Dustin Cumming. “It’s at the center of everything,” he says, “but there are only a couple of blocks in all of West Hollywood that have this tranquil feeling with these beautiful big homes, big lots and a little bit of breathing room.” The area’s exclusivity, he adds, translates to a low inventory of homes for sale, adding to the property’s investment value. “This street in this neighborhood is the new Beverly Hills of the West Hollywood… it’s being regentrified and people are coming from all over to this area.”

Consistent with its lofty address is a design aesthetic that feels quintessentially Los Angeles, with touches that echo its most golden eras. The master bathroom, for instance, is a chandelier palace of a glossy porcelain, glass, and quartz where one might expect to find Jean Harlow primping at the endless counter or soaking in the eggshell tub. Ditto for the walk-in closet. The generous space is lined with custom cabinetry and a glowing vanity that looks straight from the set of a 1930’s song and dance extravaganza. “The closet I’m so jealous of,” says Schindler with a chuckle. “My husband would love me to sell mine and move over there.” The master bedroom is a haven of refined leisure where white walls contrast with deep-hued wood floors, and glass doors slide open to merge the space with the outdoors.

If one wishes, life can be lived exclusively on the street-level floor, with the uppermost level reserved for guests or family who can enjoy the two-bedroom suites with outdoor sitting areas and a spacious fresh-air lounging deck. A bachelor, Schindler muses, would be more than satisfied with the man cave on the lower level, which is home to a mirrored gym and a spa, another bedroom suite and a billiard room, plus an office and a multi-level theater. “I can see someone being down in the cinema room,” says Schindler, “then taking the elevator up to the outdoor deck and having cocktails and barbecuing.”

“Judi is one of the most dedicated and passionate developers I’ve ever met. Her attention to detail and hands-on approach is par excellence.”

It’s a unique approach, he says, since not all developers stay so personally involved from start to finish.

“Judi is in, step for step, with every design aspect of this house,” he adds.

Such involvement makes for a dreamy end-product that stokes the imagination—one can get excited just by looking at its photos and imagining what life could be on such a well-sculpted stage.

“California introduced my East Coast mentality to the West Coast,” says Schindler—and brought with her a fresh dose of modern glamour.

Explore Story
Ideally located in Trousdale Estates, this turnkey property with an incomparable view combines Hollywood elegance with organic modern…
0
0
0
Explore Story
3400 The Strand a luxe Louie Tomaro oceanfront residence creates an island-like getaway on the Manhattan Beach Strand 5 Bedrooms …
0
0
7
Explore Story
From a Malaga Cove masterpiece to a Rolling Hills historic estate, here’s what’s on the market that you can buy for around $12,000,000. Bring your wallet with you.
0
0
0
Explore Story
Cross through the main gate of Rolling Hills and one enters a world unto itself: a tranquil place of open spaces and white fences, flush with native vegetation and horse trails. Drive along Portuguese Bend Road for five minutes or so to reach one of the highest points on the Peninsula, and with it, a unique property. One that marries acres of carefully landscaped California beauty with a home that features a collection of custom design features, many of them culled from the homeowner’s take on some of the best hotels in the world.
0
0
0