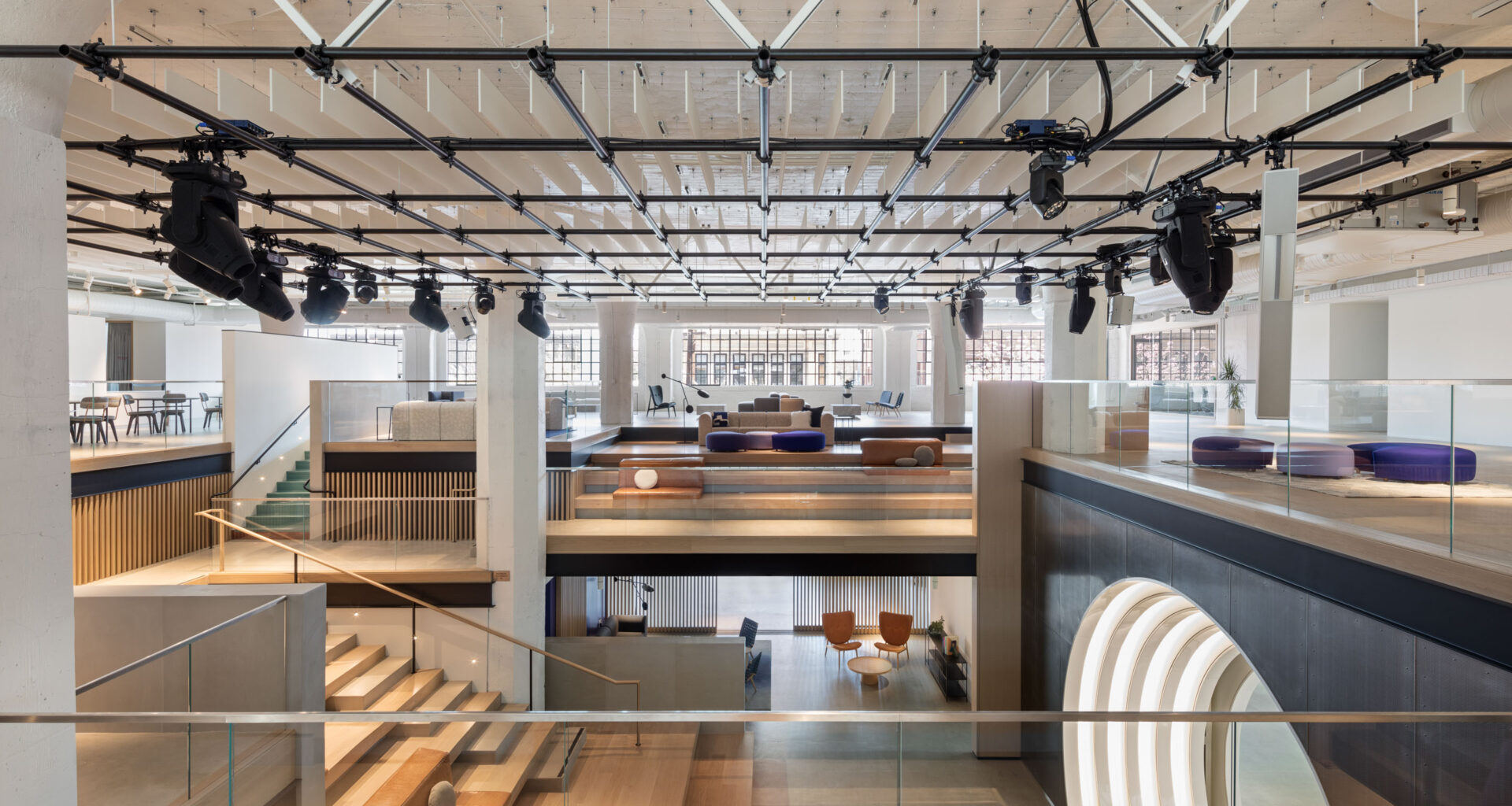 To accommodate the new headquarters, the site—which comprises a five-story tower and an adjoining two-story building, originally designed by architects John Parkinson and George Bergstrom in 1912 as a place to manufacture and show Model Ts—was transformed from an advanced state of disrepair.

In 2014, Rockefeller Kempel Architects led a complete restoration and modernization to preserve and enhance the original character of the building, which has since obtained LEED Gold Certification from the U.S. Green Building Council in 2018. Rockwell Group was in charge of the whole interior design concept based on the record company’s history and catalog of work, music-making, and performance. Each one of Warner Music Group’s seven groups has its own space with a distinct look, reflecting the groups’ unique cultures.

Starting on the ground floor, a flexible 150-seat live performance space and adjacent lounge area—that can be used for concerts, presentations, or meetings—showcases Warner Music Group’s roster of recording artists and songwriters in an airy atmosphere. Also situated on this floor and the mezzanine, the two-story coworking space features several types of seating and tables, as well as a pool table, a ping pong table, and other games. The tones are mostly neutral and combine with the original poured-concrete flooring, while pops of blue and purple add freshness and contrast.

The color palette of soft hues with touches of bright tones continues on the first floor, shared by the offices of ADA, WEA, and Rhino. The 110-seat commissary, adorned with photos of artists and songwriters, serves Stumptown Coffee and light fare. The lobby features a chandelier installation with the logos of the publishing company and each of the labels while the iconic Warner Music Group “W” button logo is on a wall.

Johnny “KMNDZ” Rodriguez. On the third floor are the offices of Atlantic, which features a custom dyed rope installation in the reception area. On the fourth and fifth levels, Warner Chappell is furnished with pieces referring to Brazilian modernism. Drawing inspiration from the work of iconic Brazilian landscape designer Roberto Burle Marx and located under the L.A. water tower, the rooftop offers fabulous views of the city with lounge seating.

Open and bright, the Warner Music Group’s workspaces merge old and new elements, soft and raw materials, as well as neutral and bold colors in a balanced way that will, for sure, stimulate creativity.

Explore Story
After following in the footsteps of a family rife with talented designers, artists and architects, Jeff Stimpfig has naturally emerged as one of Southern California’s top landscape design and build professionals.
0
0
0
Explore Story
A few steps from chic Avenue Montaigne and the renowned Champs-Elysées sits the elegant Haussmann building where Stéphanie Coutas found her personal refuge. Spread over 3,875 square feet, the four-bedroom apartment initially comprised a series of enclosed rooms. For this project, which kept Coutas busy for 18 months, the French designer wanted to create more flow and highlight her extensive art collection.
0
0
0

Explore Story
A remarkable stillness seems to settle over the gracious, stone-edifice, richly windowed home in the Vestavia Hills neighborhood of Birmingham, Alabama, with interiors by Sean Anderson.
0
0
0
Explore Story
Working across mediums, London-born, New York-based designer Anna Karlin creates an eclectic collection of lighting and furniture at the crossroads of art and design.
0
0
0