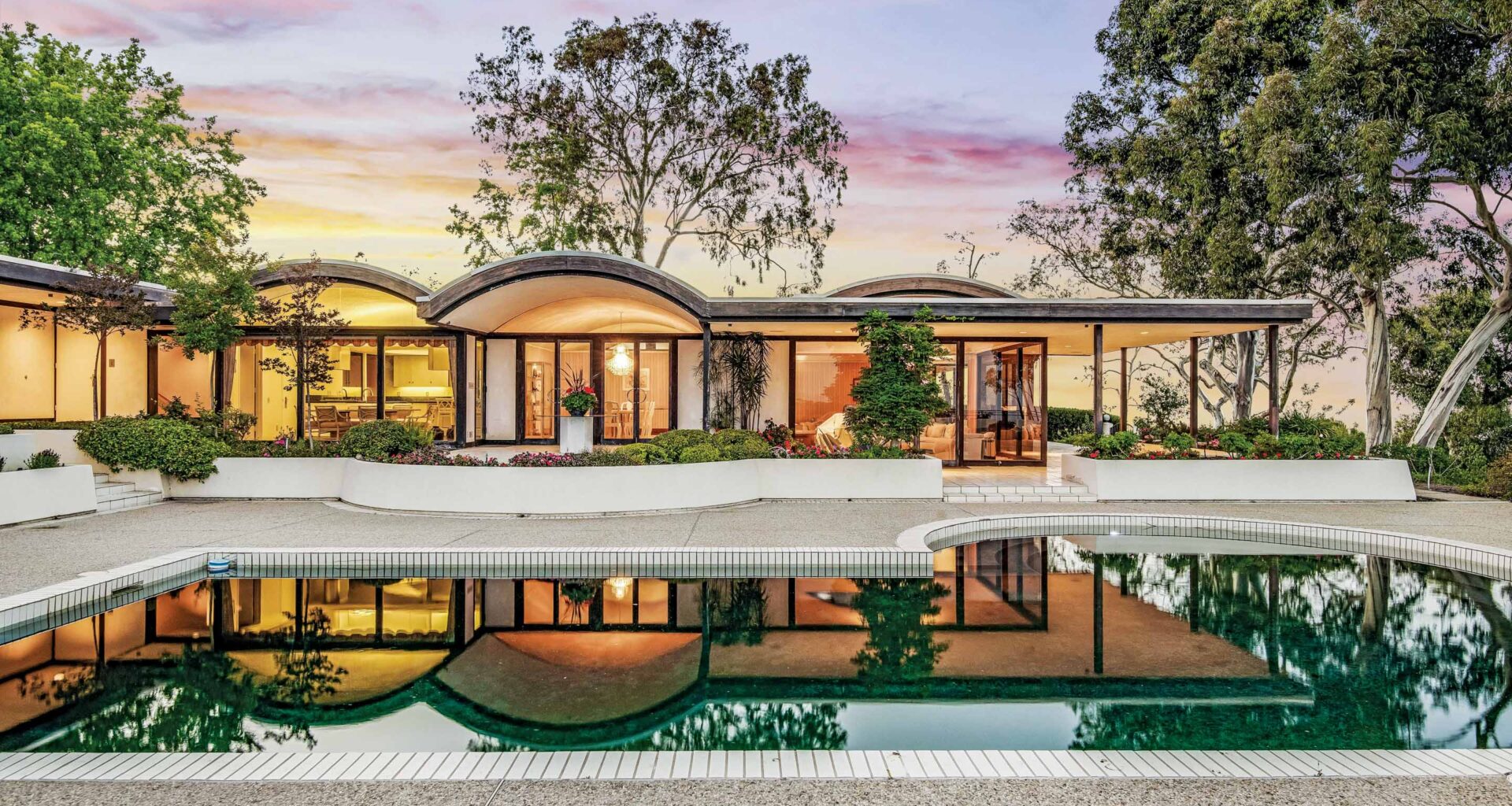 Tucked away in privacy, at the end of a long driveway, is a bona fide Modernist estate at 6110 Via Subida. Approximately 6,646 square feet in size, the generously sized residence is faithfully designed in the Modernist tradition.
Total
0
Shares
0
0
0

To rise, ascend or climb—that’s the Spanish subida translated to English, and it’s a fitting name for the quiet, tree-shaded street that winds above Palos Verdes Drive East in Rancho Palos Verdes.

Tucked away in privacy, at the end of a long driveway, is a bona fide Modernist estate at 6110 Via Subida. Approximately 6,646 square feet in size, the generously sized residence is faithfully designed in the Modernist tradition that aimed for elevated living on two important fronts: In the pragmatic sense—such as serving inhabitants by making them feel more productive and peaceful—and the aesthetic; namely, uniting them with their natural surroundings.

Nearly 50 years after its mid-1970s completion the 6-bedroom, 7-bathroom house remains a vision of Midcentury purity with its airy spaces, broad expanses of glass and endlessly lush hillside views.

A clue to the home’s design can perhaps be found in the career of the homeowner who most recently lived there—a Big Five automobile executive and engineer who had much to do with energizing the auto industry during its golden postwar epoch, and for decades after. (He also, no doubt, appreciated the dedicated elevator that whisks you to the multi-car garage.)

The property’s two-plus acres have been made the most of via a cleancut home design that’s poised over a free-range panorama of California coastline.

This spans a painter’s canvas of mountain ranges, green hills and a sparkling city skyline—plus the endless blue waters of the Pacific Ocean, energized by the harbor’s flow of boats coasting in and out of San Pedro Bay. Life at this property consists of days spent in and out of the home: playing tennis on the full-size court or relaxing on the sprawling pool deck, where you can slide into the pool or warm circular spa.

The pool deck, like the home itself, is orientated southbound to manage light and temperature around the year—and maximize the beauty of natural light from morning until sunset, and through quiet nights under starry coastal skies. The surrounding hardscape is pleasingly flat and ample, serving as an extension of the home itself, complete with slender overhanging eaves.

This is where you can lounge under old-growth trees, dine year-round or let children play under the watchful eyes of parents located indoors, where floor-to-ceiling glass is a central component. The home’s ample sliding doors are also key to plentiful views and instant access to the outdoors, as well as a way to invite mountain breezes through the home.

The home’s roofline—a dramatic mix of horizontal and barrel-shaped—produces its distinctive silhouette. It also shuttles in additional sunlight and adds visual texture to key public spaces, like the glamorous living room replete with glass, front-row views and a chrome-framed fireplace.

“The arched ceilings and rooflines,” points out Chris Adlam, “along with one-of-kind features, like the circular bar in the living room, are part of what makes this home noteworthy.”

A graceful barrel-vaulted ceiling is also on display in a fireplace family room located across the pool deck, which could also serve as a standalone playroom or sunlit studio.

Notable is the home’s floorplan, which consists of the main residence area housing four-bedroom suites; among them is a sizable primary suite with a peaceful sitting room and a sprawling bathroom. Central to the floorplan is a formal dining room and a white kitchen with a novel design: Appliances, like the cooktop, are blended neatly into countertops, and a freestanding circular island houses the sink.

Connected to but distinct from the main home are discrete pods—each with a separate entrance and bathroom—that can function as standalone guest quarters or offices. Reflecting on the fluid work-home lifestyle framework of recent years, this feature feels particularly timely.

So, too, does the always-on access to the outdoors. While the home already has a healthy size footprint, its design makes it seem even larger. Expansiveness comes from the connection with nature, boosted by the luxury of living in a sequestered world of one’s own. (The real world, however, is not so far away: Grocery stores, golf and the beach are 10 minutes by car, and the 110 Freeway is 5 miles away.)

Enter also entertaining. Guests can park in the spacious motor court before joining the festivities—which can be as grand as a fresh-air fête for a couple of hundred, martini glasses clinking by the pool, or a small gathering during sunset hours in the living room with flames flickering in the fireplace.

At twilight, the pool reflects the home’s strong, elegant lines in the water and adds a moody glow to the tranquil atmosphere. A water element is central in Midcentury architecture, adding a cooling point while bonding a structure even closer to its natural environment.

It’s not surprising to find one here, in a home faithfully designed around the core of Modernist luxury—to create a superior atmosphere for living. Remaining largely undisturbed and intact, and with its abundant flow of light and energy, the residence continues to speak a language that’s as understood and valued today as it was when built nearly half a century ago, and will continue to for many years to come.

Explore Story
Step across the sprawling front lawn, and once inside the home—approximately 6,571 square feet in size, with 5 bedrooms and 6 bathrooms—you’re in an elegant hideaway crafted by architect Tony Ashai.
0
0
0
Explore Story
A Light-Bright Modern Farmhouse Proves A Happy Home Stretched brilliantly around a large corner lot on 21st Street…
1
0
0